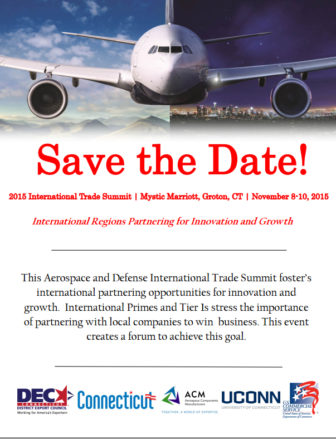 It may not be as big as the Paris Air Show, but some of the same companies that attend that event, including Airbus and Northrup Grumman, will gather in Groton on Monday to pursue the same goals they seek every year in France – more sales and the information needed to make good business decisions.

Large defense contractors, including Pratt & Whitney, Electric Boat, Boeing and Lockheed Martin, will play central roles, discussing government procurement and other issues at the Aerospace & Defense International Trade Summit on Nov. 9 and 10 at the Mystic Marriott.

They also will try to sell their weapons systems to an international slate of attendees, including defense procurement officials from the United Kingdom and other NATO countries and representatives from Australia, Malaysia, Singapore, South Korea and Japan.

Its part trade show, part conference. But the press will be locked out of the most interesting panels, including all the procurement sessions held by the nation’s top defense contractors.

The aerospace summit was inaugurated last year, but Rep. Joe Courtney, D-3rd District, who helped organize the event, said the two-day conference will be bigger and better – and likely to lead to the establishment of the summit as an annual event.

“Last year we weren’t sure what the response was going to be, but it was a totally packed house,” Courtney said.

There will be about 70 smaller Connecticut companies at the event, mostly manufacturing firms, also trying to boost sales, as well as about 50 others from out-of-state.

“We have a lot of advance manufacturing firms in my district and around the state that don’t have a lot of resources to hire lobbyists, so bringing a lot of contractors together struck us as an efficient way for them to mingle among themselves,” Courtney said.

Kevin Flanagan, vice president and co-owner of Flanagan Industries of Glastonbury, said he hopes to “increase our global presence” by attending the conference.

“It gives us the ability to meet European customers without going to Europe,” Flanagan said.

Flanagan, whose company makes casing for airplane engines and counts Pratt & Whitney and General Electric among its customers, said he also hopes to make more contacts with U.S. defense contractors and find out from them “what’s happening in the industry, as far as trends go.”

Nicholas Stein, strategic accounts manager at Westminster Tool of Plainfield, said he’s attending the summit for “a number of reasons, mainly to get our name out. His company makes molds and polymers used largely in the aerospace and medical industries

“We want to connect with as many ‘tier one’ aerospace companies as possible,” Stein said, referring to the big manufacturers of airplanes and airplane engines. “Because (the summit) was expanded this year it gives us opportunity for exposure.

Courtney said the summit will allow for valuable “face-to-face meetings.”

“That’s where the magic happens,” he said.

He visited Westminster Tool last week to announce the summit. But it’s been in the works for months.

“It is a government event put on with no government money,” Evans said.

Participants pay a $795 fee to attend the summit.

She also said the event is cost-effective.

“Companies don’t have a lot of time. We needed to pull something together that gives them opportunity to be in front of customers and also meet supply chain companies.

Sens. Richard Blumemthal, who sits on the Senate Armed Services Committee and Sen. Chris Murphy, who is a member of the Senate Foreign Relations Committee, will hold sessions on defense spending priorities and European defense trends, respectively.