Democrats will offer their own state budget fix next week 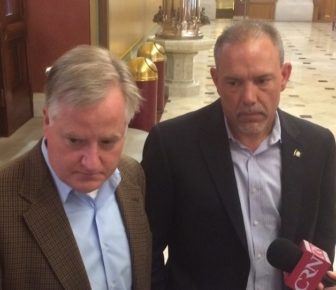 Malloy offered legislators a plan Thursday to cut spending by $350 million this year, with the reductions falling heavily on social services, education and municipal aid. The Democratic governor also suggested closing a prison, two courthouses and a state police barracks; eliminating advocacy groups for women, children and minorities; and finding another $85 million in still-to-be-identified savings among all agencies and departments.

“I think there’s a genuine concern about social services” that Malloy cut in September, Sharkey said, as well as about additional cuts the governor recommended in these areas this week.

“We want to make those choices that are going to protect the folks who need it the most,” the speaker added. “That is at the core of what our proposals will be about.”

Aersimowicz said that doesn’t mean Democrats won’t consider any reductions in these areas.

“I think everything’s on the table,” he said. “I think we have to have the honest discussion and get to the number that we’ve all agreed upon, so I’m not going in with any pre-set notions. I know our caucus feels very strongly about protecting them, but at least we should have the discussion.”

“I think there’s interest in having that conversation within the caucus,” the speaker said. “… That has to be a partnership” with state employee labor unions.

But House Democrats, who met in a closed-door caucus around 11 a.m. on Friday, are also concerned about a GOP proposal to pay incentives to encourage senior state employees to retire. This would save an estimated $80 million this year in salary accounts. But such programs traditionally weaken the state pension system over the long haul.

“They have a way of imposing long-term liabilities on the state,” the speaker said.