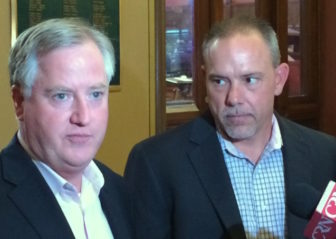 Leaders of the House Democratic majority said Friday they expect the General Assembly to return for a special session before Christmas to pass a deficit-mitigation plan, despite differences with Senate Democrats and the Republican minority.

House Speaker J. Brendan Sharkey of Hamden and House Majority Leader Joe Aresimowicz of Berlin said after a caucus that their members remain opposed to retirement incentives or suspending the public financing of campaigns.

“If you’re talking about long-term fiscal stability and accountability, every analyst will tell you that a retirement incentive plan does just the opposite,” Sharkey said.

After working jointly with the House majority, Senate Democrats on Thursday issued their own plan constructed around retirement incentives. They dropped their proposed cuts to campaign finance.

Senate President Pro Tem Martin M. Looney, D-New Haven, issued a statement that ignored his differences with the House and stressed the leaders’ ability to work together.

“We’ve worked together on many of Connecticut’s most important issues including passing historic property tax relief and the bipartisan jobs bill,” Looney said, describing the caucuses as “in somewhat different places on how best to balance Connecticut’s budget.”

Looney said he was committed to continuing “the bipartisan process.”

On Monday, House and Senate Democrats jointly proposed a mitigation plan that included nearly $12 million in savings from suspending the public financing of state legislative campaigns in 2016.

With significant opposition within their own caucus and advocacy groups, Senate Democrats dropped the idea in favor of a retirement plan they say could save about $80 million in this fiscal year and next.

“Our caucus was adamant that should not be part of the package,” Sharkey said.

Sharkey said he was disappointed the Senate unilaterally issued its own plan, but he remains optimistic that the four legislative caucuses and the administration can agree on cuts by an informal deadline of Dec. 4.

The bipartisan talks with the Senate and administration are to continue Monday.