Malloy: Time is running short to strike a budget deal 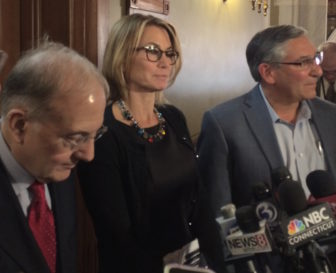 While legislative leaders were uncharacteristically coy after Monday’s budget negotiations, Gov. Dannel P. Malloy made it clear lawmakers are running out of time if they want to play a role in balancing state finances.

The governor, who invited legislators from both parties almost five weeks ago to help balance Connecticut finances, also warned he wants to ensure state government is poised to save funds entering the third quarter of the fiscal year, which starts Jan. 1.

If lawmakers cannot agree on a deficit-mitigation plan, Malloy has said repeatedly he again would use his emergency powers to reduce spending unilaterally.

“I think we’re running out of time,” the governor said. “I think that it’s not over, but we have a limited amount of time.”

When pressed to point to any signs of encouragement, the governor said “we’re talking.”

He added there is “some common ground” on how to reduce red ink. “I think there’s a realization of what the issues are,” he added. “People’s ability to move on the issues is what we’ll test tomorrow.”

The Democratic governor and legislative leaders from both parties agreed to meet at 2 p.m. Tuesday in the governor’s office.

Malloy does have limited discretion to reduce spending unilaterally. But when he used that authority in December to close a relatively modest, $103 million hole in state finances with cuts to hospitals and social services, he was criticized by top lawmakers from both parties.

Over the past five weeks, though, those leaders have struggled to find much common ground. The largest area of agreement among all proposals is to require the administration to identify more than $80 million in savings among all departments and agencies.

House and Senate Republicans as well as Senate Democrats favor offering incentives to senior state workers to retire. Malloy and House Democrats oppose that plan which, while saving about $80 million per year in the budget, would weaken the pension fund somewhat over the long haul.

The current state budget is anywhere from $118 million to $330 million in deficit, according to competing projections.

In addition, legislators hope to reverse some of the cuts Malloy ordered in September to hospitals and social services. And both the governor and legislative leaders have said they would like to find some additional spending cuts to finance some modest, new tax breaks for businesses.

Top lawmakers from both parties met with the governor for nearly two hours Monday, after which they insisted they remain hopeful a deal on a bipartisan deficit-mitigation plan can be reached in time for a special legislative session vote in mid-December.

“I think if we weren’t optimistic about where we are going, we wouldn’t be coming back tomorrow,” House Minority Leader Themis Klarides, R-Derby said.

When asked if Monday’s talks had produced agreement on how to achieve the bulk of the savings they hoped to achieve, House Speaker J. Brendan Sharkey, D-Hamden, said, “I would not characterize it that way. … We are all still talking.”