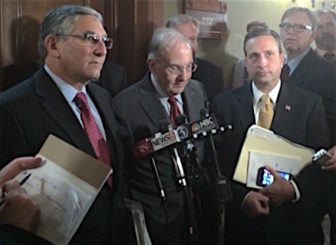 While state legislators were upbeat after a second round of budget talks Tuesday with Gov. Dannel P. Malloy, they conceded that a proposal to offer retirement incentives to state workers — though not dead — had been weakened considerably.

But while Malloy was most reserved, legislative leaders from both parties also announced they were hopeful enough that a deficit-mitigation plan would be resolved soon to tentatively schedule a special session for the week of Dec. 7.

Negotiations, which began one month ago, have progressed slowly as competing philosophies have — at times — divided Democrats and Republicans, House and Senate members, and the executive and legislative branches.

“We’re hopeful about the discussions today,” Looney added. “We think we have narrowed a lot of the differences between us.”

Though lawmakers wouldn’t commit to a special session the week of Dec. 7, Senate Minority Leader Len Fasano, R-North Haven, took it as a positive sign that a tentative time had been set aside. “It’s always good for the legislature to have a targeted time,” he said.

When the process began last month, Malloy and legislative leaders agreed to search for spending cuts to save between $350 million and $370 million per year, to serve three purposes:

Malloy has asked lawmakers to increase corporations’ ability to claim research and development and other tax credits that encourage businesses to test new ventures and expand. These changes would cost the state about $20 million per year. 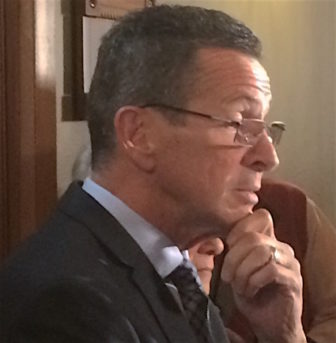 But while there has been bipartisan support for the concept of delivering some business tax relief, one of the sharpest points of contention centers on a plan to cut state employee salary costs in the budget — at the expense of the long-term health of the pension system.

House Republicans and Senate leaders from both parties have proposed offering retirement incentives to encourage senior workers to retire. House Democrats and Malloy have opposed such a move, which results in more retirees drawing benefits from the pension system, and fewer employees working — and therefore paying into the pension system.

Fasano and Looney both said a revised estimate from the legislature’s nonpartisan Office of Fiscal Analysis downgraded the anticipated budget savings from about $80 million to just over half that amount.

“That has been a little twist, if you will, that has caught us all by surprise,” Fasano said.

But none of the legislative leaders nor Malloy said retirement incentives are out of consideration.

Lawmakers wouldn’t say the $350 million-to-$370 million target for new savings was unachievable, or if they were aiming for something less. But when pressed on whether they still expected to achieve that much, they responded cautiously.

But the governor, also a Democrat, was even more restrained in assessing the progress made to date.

Tuesday’s talks were more boisterous. “It was, as we call it in diplomatic terms. a frank exchange of ideas,” Malloy said.

“I don’t think we made, before today, nearly enough progress,” the governor added, before quickly qualifying his statement. “Potentially, progress has been made.”