Once a Sikorsky-flying Marine, he now pilots the company 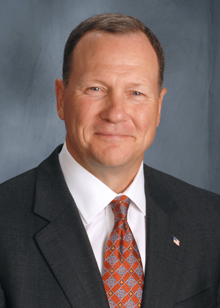 Washington – Dan Schultz doesn’t like to talk about it, but he flew a harrowing mission in the first Sikorsky Super Stallion chopper to arrive to rescue Americans and other foreign diplomats holed up in the American embassy in Mogadishu, Somalia, in 1991.

Earlier this month, Schultz was named by Lockheed Martin as Sikorsky aircraft’s new president, returning him to Stratford, where learned to fly a helicopter years ago as a young Marine.

“To me this is kind of full circle,” he said.

Lockheed Martin’s recent $9 billion acquisition of Sikorsky raises the question of what plans the nation’s largest defense contractor has for a company that’s been in Connecticut for more than 80 years.

Schultz said that he plans no big, immediate changes at Sikorsky — including in the size of the workforce. He said he’s making plans to move to the Stratford area from his native Virginia to learn about his new assignment and environment.

Schultz, 62, was a major in the Marines when he led the Somali operation, called “Eastern Exit.” It involved flying nearly 500 miles to reach the besieged U.S. embassy, precarious in-flight refueling, a failed navigation system that forced Schultz to set his course by “dead reckoning,” and skilled maneuvers to avoid radar and ground fire.

The landing of his CH-53E Super Stallion on embassy grounds began the rescue of 281 men, women and children from 31 nations who had been under fire from rebels who were about to breach the complex’s walls. He flew 61 people out of the compound, and other Marine choppers rescued the rest.

He says he doesn’t like to think of his combat experience now. But Shultz has been involved in the nation’s defense nearly all of his life.

A Sikorsky CH-53E Super Stallion being refueled in flight.

A graduate of Virginia Military Institute, Schultz received a master’s degree from the National Defense University. One of his twin daughters is a Marine.

While in active service, Schultz was the program manager for the troubled Joint V-22 Osprey, an accident-prone tilt rotor aircraft built by Bell Helicopter and Boeing that was grounded after 19 Marines were killed during maneuvers in the Arizona desert in 2000 and at other times because of crashes.

“I went in to get the Osprey back in flight,” he said.

Schultz also served 10 years in the Pentagon, a stint that included working for the Navy’s acquisition office and for the Joint Chiefs of Staff’s Joint Requirements Oversight Council, responsible for the Pentagon’s acquisition review process.

Then his career did a 180-degree turn. He left the Pentagon’s acquisition team to work for defense contractors, including Raytheon.

He said the hardest thing to convey to military officials is that when a defense contractor wins a contract “it’s the highest of highs, and when you lose, it’s the lowest of lows.”

Schultz said he was chosen to lead Sikorsky for a number of reasons: He successfully ran a Lockheed Martin company for 10 years and was was experienced as a helicopter pilot and commander of Marine Heavy Helicopter Squadron 46.

“It’s very unusual to have someone who knows so much about helicopters work for Lockheed Martin,” he said. “I’d also like to think I’m really good at what I do.”

The company’s lack of helicopter expertise is what attracted Lockheed Martin, an aerospace leader, to Sikorsky.

“It was a once-in-a-lifetime opportunity that Sikorsky was available,” Schultz said.

“We have complimentary skills, and we can learn from each other,” Schultz said.

“This transaction is the most significant change at the weapon system prime level since the large-scale consolidation that followed the end of the Cold War,” Kendall said at the end of September.

But Loren Thompson, a defense analyst for the Lexington Institute, said the merger is “a great outcome, both for the companies and for the government customer.” That’s because Lockheed Martin is so heavily involved in defense work and is “the world’s premier integrator of combat systems.”

“Lockheed Martin is committed to the government in a way that other buyers would not have been,” Thompson said.

Even before the acquisition, Lockheed Martin had dipped its toe into the world of autonomous, or pilotless, helicopters with the development of the K-MAX, which has been used to deliver supplies to Marines in Afghanistan.

Sikorsky, meanwhile, has been testing an autonomous version of its famed Black Hawk. The companies can now combine their engineering, technological expertise and patents in this field.

Schultz said Sikorsky will continue to have “a good balance” between defense and commercial sales. He has an app that monitors the price of oil because a lot of Sikorsky’s commercial sales are to energy companies that ferry workers back and forth from offshore drilling platforms. With the precipitous drop in oil prices, demand for those choppers is way down.

Although Schultz said Lockheed Martin “is going to try to run Sikorsky as it is,” he wants to implement some “best business” practices.

They include asking for help when needed, “challenging each other’s ideas, and communication “up and down the ladder.”

“My goal is to build the most reliable and safe helicopter you can,” he said.