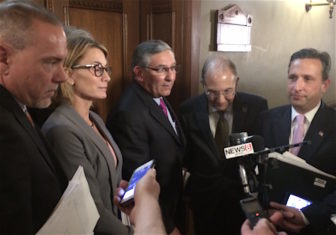 Even with a state employee retirement incentive plan out of consideration, Gov. Dannel P. Malloy and legislative leaders insisted Tuesday that a major deficit-mitigation plan could be enacted by mid-December.

And the governor, who met with top lawmakers for nearly three hours Tuesday, also hinted that some of the “cuts” might not be actual reductions in spending — but rather the shifting of costs outside of the general fund.

“I think everyone came today having made some level of compromise,” the Democratic governor said afterward. “I think it’s going to take additional compromise. But I have not felt that an agreement could be reached, and I feel it’s certainly possible now.”

Malloy and legislative leaders agreed when they began talks to cut budget costs by $350 million to $370 million for three purposes:

Senate Majority Leader Martin M. Looney, D-New Haven, said one positive sign is that the administration and legislators from both parties each have developed cost-cutting proposals that achieve the $350 million in savings.

“The issue now is to get the consensus” on which steps to take, Looney said.

“I think the numbers are getting closer,” Senate Minority Leader Len Fasano of North Haven, said, confirming that lawmakers no longer are considering a retirement incentive program.

The idea of offering incentives to senior state employees to retire appeared to be in trouble last week after fiscal analysts cut their estimates for the budget-savings from $80 million to just over $40 million. Such programs are controversial because, while they save funds in the budget, they weaken the pension system, which already is poorly funded.

House Minority Leader Themis Klarides of Derby, said it’s hard to quantify the value of all the points of contention, but all sides have agreed to resume talks Wednesday afternoon. “When we come out and we say we’re coming back tomorrow, that’s always a good sign to me because that means we have more work to do,” she said.

But in most state budget deals, not all of the “cuts” usually translate into reduced spending.

In some instances, legislators and governors remove a program from the general fund and shift it into secondary budget funds supported with assessments on the insurance or banking industries.

In other instances, programs are moved into one of the hundreds of special funds or accounts outside of the budget entirely. And in some instances, these involve using one-time sources of money to fund programs with annually recurring costs.

When asked whether he believed the savings target would be reached, Malloy said that “… a purist might not agree that everything that gets put in the column by one side or another side” is an actual cost-savings.

The legislature’s Democratic majority has shifted general fund spending increasingly into these controversial areas in recent years as the state’s fiscal woes have intensified.

Fasano also disclosed no specifics, but said that when it comes to reducing budget spending, “we come at it from different directions.”

Legislative leaders also said Tuesday that recent legal action taken by the Connecticut Hospital Association was unlikely to deter lawmakers from their goal of assisting hospitals.

The association filed letters with two state agencies Monday seeking declaratory rulings on the constitutionality of Connecticut’s provider tax — a move seen as the potential forerunner of a lawsuit by the hospitals.

The industry has complained loudly in recent years as a tax once used primarily as a mechanism to leverage more federal funds has become a more traditional levy on hospitals.

Hospitals in 2011 first were asked to pay $350 million to the state, after which Connecticut responded by giving the industry $400 million back. This back-and-forth arrangement enabled Connecticut to qualify for $200 million in additional federal Medicaid payments.

The tax now stands at $560 million and hospitals receive very little back this year. Malloy and other administration officials have defended the move, citing both the state’s fiscal challenges and hefty profits some hospitals have earned in recent years.

“I think all of the caucuses have been supportive of the hospitals, and I think that’s continued through the negotiations,” House Majority Leader Joe Aresimowicz, D-Berlin, said.

But the governor said he is happy the hospitals “finally showed their hand. …The hospitals want to be able to dictate to the people of Connecticut (that) you are going to pay us a lot more money, period.”

Legislators and the governor are trying to have a deficit-mitigation bill ready for the General Assembly to consider in special session next week.

House Speaker J. Brendan Sharkey, D-Hamden, said that remains the goal, though there could be a “little bit of a hiccup” in providing the statutorily required 10-day legal notice to all legislators. But Sharkey added leaders also believe that requirement won’t be necessary if Malloy — rather than top lawmakers — formally calls the General Assembly into session.