Helping children cope with tragedies that don’t make the news 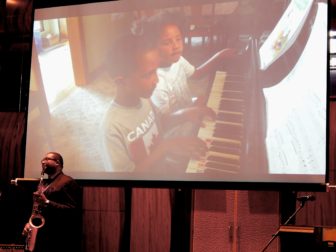 A video of Ana Grace and Isaiah Márquez-Greene playing piano and singing played at the beginning of the conference after their father, musician and professor Jimmy Greene, played. Ana Grace was killed at Sandy Hook Elementary School.

Danbury – The conference was 15 months in the planning, but Nelba Márquez-Greene acknowledged in her opening remarks that she hadn’t wanted to come.

It was the day after shooters killed 14 people in San Bernardino, Calif., the largest mass shooting since Marquez-Greene’s daughter, Ana Grace, was killed at Sandy Hook Elementary School along with 19 other first graders and six educators in 2012.

But the Love Wins Mental Health Conference held Wednesday as part of the program created in her daughter’s honor wasn’t about what happened at Sandy Hook, Márquez-Greene told the audience, made up largely of mental health professionals and educators.

It was about something bigger, and more routine.

“The truth is that right now, San Bernardino, Sandy Hook, they have to be mass to get our attention,” she said. “Kids suffer from violence, experiences, all kinds of losses, every day. And we’re missing that because maybe their specific tragedy doesn’t make it on the news.”

The conference focused on many of the themes central to The Ana Grace Project, the program Márquez-Greene and her husband, Jimmy Greene, began in their daughter’s name: The importance of relationships in building resilience and healing, and the need to understand the signs that children need help. Speakers talked about trauma, resilience, responding to children and families after disasters and school safety.

“This is about meeting the basic needs of all families, and recognizing that those basic needs include taking care of the heart,” said Márquez-Greene, a licensed marriage and family therapist.

Dr. Bruce Perry, a well-known trauma expert, described how children with a history of trauma could be inaccurately labeled as having attention deficit hyperactivity disorder or a conduct disorder, and why others, whose brains responded differently to their traumas, could go under the radar, their needs unnoticed. 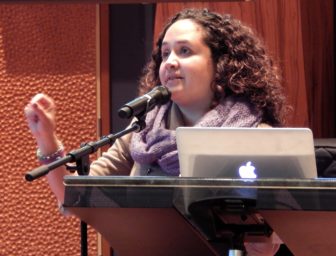 Relationships are key to overcoming those experiences and building resilience, Perry said. But he said he worries the way society has evolved – including the fact that people now have fewer close relationships – could limit the ability for that to happen.

“We’re fragmented, and we’re in front of a screen all the time,” he said. “It’s having really significant consequences, I think, on the resilience potential of our communities.”

The brain is malleable, Perry said, and if a child lives in an environment that’s extreme or unpredictable – if there’s domestic violence, for example – his brain will likely adapt as if it needs to be ready to mount a stress response at all times.

That vigilance can lead a child to become emotional easily or respond in ways that can seem out of proportion. It can lead to a child’s being labeled as having ADHD or a conduct disorder. If the child sees someone who reminds him of the abuser and becomes triggered, it could lead him to try to leave the room or act out in a way that makes little sense to those around him – potentially, something that could get him referred to the juvenile justice system, Perry said, particularly if he’s older or a minority.

In other cases, Perry said, the opposite happens: A child responds to a traumatic experience by disengaging, which is common among children who have been sexually abused. And their symptoms might go unnoticed, he said.

“A lot of times these are good little girls or good little boys. They do their homework,” Perry said.

But the brain’s malleability can also allow it to heal.

“The great thing about the brain is that if you actually activate the right networks with the right pattern, you can make remarkable changes,” Perry said.

And, he noted, some people who had bad things happen to them do well in spite of them.

What makes the difference?

Resilience isn’t a persistent trait, Perry said; it’s something people demonstrate. Sometimes they have it in some situations but not others. It can wear down, or can be built up.

And the factors that contribute to resilience have a common thread, he noted: having connection to a community, to family, or having at least one person who provides unconditional love.

“It’s all about relationships,” Perry said. 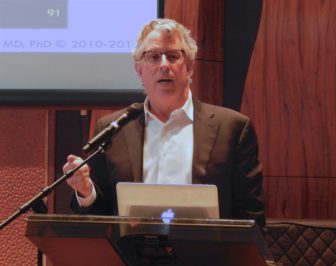 Research has shown that people who have experienced multiple types of adverse childhood experiences – such as abuse, neglect or losing a parent – have a higher risk of a wide range of diseases and mental health problems later in life. But those risks are lower in people who have strong, supportive relationships, Perry said. And the presence of those connections can be more predictive of how a person functions as an adult than the history of adversity.

“Which is a very hopeful and positive message,” Perry said. “It means that we can actually address these issues in ways that will allow us to make changes.”

After 9/11, Robin Gurwitch asked her young daughter what she knew about it. And she learned her daughter thought terrorists were holding children hostage in a school.

Gurwitch had more expertise than most parents helping their children cope with a disaster: She’s a clinical psychologist at Duke University Medical Center and has worked with children after many disasters. And, she said, asking her daughter what she knew was key: Without asking, she probably wouldn’t have been able to debunk the idea of a hostage situation that was worrying her child.

Missing the effects of trauma in children is not uncommon, Gurwitch said. Several months after the 1995 Oklahoma City bombing, a screening found that the majority of schoolchildren still had problems, but fewer than a quarter had ever talked to a mental health professional or clergy about them.

“We underestimate,” she said.

It’s common for children to experience guilt and shame, even at young ages. After Hurricane Katrina, Gurwitch said, she heard children aged 6 or younger say if only they’d remembered to bring the insurance papers or other things, their parents wouldn’t be so upset.

Among the things can help children cope or build resilience: Having a routine, and helping others – perhaps writing letters to first responders or shoveling a neighbor’s driveway after a storm.

“Children that can find some way to help others do better,” Gurwitch said.

And the way a child’s caregivers cope with a disaster, and whether they talk about it, are major predictors of how well the child will do, Gurwitch said.

“It’s ok to be upset,” she said. “It’s ok for children to see you cry. What’s a problem is if I’m upset and I cry and I go in my bedroom and I come out” feeling better, but the child never understands why.

Related: How to talk about trauma