Obama wipes away tears as he talks about the deaths of 20 first-graders at Sandy Hook Elementary School.

Washington – Tearing up as he spoke of the slaying of 20 Newtown first-graders, President Obama made an emotional appeal to the nation for support of his latest gun control initiatives on Tuesday, saying, “Every time I think about those kids, it gets me mad.”

The Newtown tragedy prompted the president to press for tighter gun control measures three years ago, and family members of the victims of the Sandy Hook Elementary School mass shooting were in the East Room to help emphasize the human cost of gun violence.

“President Obama made a promise as an elected official, and a promise as a father, that he would do everything in his power to protect our nation’s children, to make our communities safer, and curb the loss of life to gun violence in America,” Barden said. “So today we celebrate another example of how President Obama and Vice President Biden continue to keep that promise.” 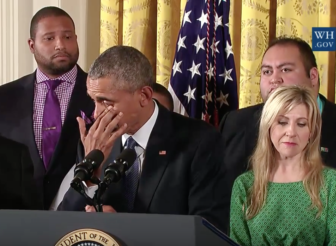 Obama wipes away tears as Jimmy Greene, left, who lost his daughter Ana in the Sandy Hook shootings, looks on.

Daniel’s mother Jackie was there, as were Jimmy Greene, father of Ana Grace Marquez-Greene, and Nicole Hockley, the mother of another slain first-grader, Dylan Hockley.

“This issue touches him as it touches all of us,” said Greene.

There were other victims of gun violence in the room too, from Aurora, Colo.; Charleston, S.C.; Blacksburg, Va., the home of Virginia Tech; Tucson, Ariz.;  and other American cities and towns that have suffered from mass shootings.

They cheered the president as he said he would implement a number of gun safety measures through executive action.

At the center of his plan is the broadening of the definition of gun dealers who are required to conduct FBI background checks of gun purchasers.

Under current law, only federally licensed gun dealers must conduct background checks on buyers. Many sellers at gun shows, web sites and flea markets skirt that requirement by declining to register as licensed dealers.

Under Obama’s executive actions, “anyone in the business” of selling guns will be considered a dealer.

“Opponents of gun violence prevention have said again and again and again, ‘We don’t need new laws, just enforce the existing law more effectively.’ And that is exactly what the president is doing,” Sen. Richard Blumenthal, D-Conn., said at a press conference in Hartford on Tuesday. “He is enforcing existing laws more effectively. He is putting gun sellers on notice.”

Obama accused the gun lobby of taking Congress hostage, but said, “they cannot hold America hostage.” He also said he was a staunch defender of Second Amendment rights.

“I get that,” the president said. “This is not a plot to take away everybody’s guns. You pass a background check; you purchase a firearm. The problem is some gun sellers have been operating under a different set of rules.”

The introduction of  the president on this White House video begins at about 35:00.

State Sen. Beth Bye, who also attended the East Room event, said, “I feel the president felt he made a promise to these people,” referring to the Newtown families, “and had to do something.”

“He has a special place (in his heart) for Sandy Hook,” Bye said.

The Democratic legislator was invited to the East Room because she belongs to a group of state and local officials who met at the White House in November to brainstorm efforts to push gun safety measures at the state and local level.

Bye said one issue that was discussed was “how do we move the restraining law forward?” a reference to a law that failed to win approval in the last session of the state assembly that would bar those under temporary restraining orders from possessing a gun.

Gov. Dannel P. Malloy was also at the event.

He said he was not surprise the president teared up.

“It clearly is an emotional thing for the president,” Malloy said of the Newtown massacre. 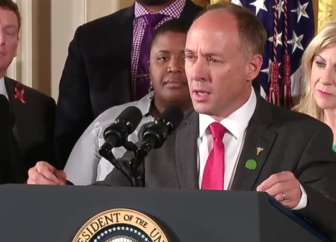 Mark Barden, who lost his 7-year-old son Daniel in the Newtown shootings, introduces the president.

“How many people can get out of a clown car at the same time?” Malloy asked.

The governor also said, “My message to everybody in every state is that Newtown is coming to you.”

“From day one, the president has never respected the right to safe and legal gun ownership that our nation has valued since its founding,” said House Speaker Paul Ryan, R-Wisc. “He knows full well that the law already says that people who make their living selling firearms must be licensed, regardless of venue. Still, rather than focus on criminals and terrorists, he goes after the most law-abiding of citizens. His words and actions amount to a form of intimidation that undermines liberty.”

Rep. Elizabeth Esty, D-5th District, who represents Newtown in Congress, said, “My answer to Ryan is, what are you doing? You can’t do better by doing nothing.” 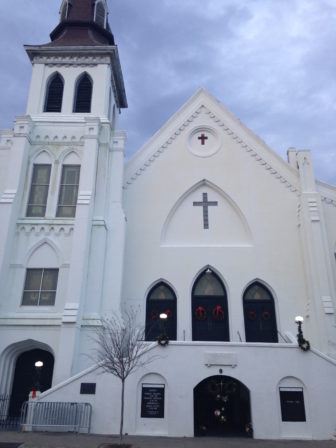 Emanuel African Methodist Episcopal Church in Charleston, S,C., where nine people were shot and killed during a Bible study session.

Obama resorted to the use of executive actions because Congress has failed to approve any gun control measures in the wake of the Sandy Hook Elementary School massacre and other mass shootings since that tragedy took place in December of 2012.

“Congress still needs to act,” the president said. “The folks in this room will not rest until Congress does.”

Barden, a founder of Sandy Hook Promise, a gun safety group led by several family members of the Newtown shooting victims, said the president’s actions “are going to go a long way toward moving the ball forward.”

He also said the Newtown families have made a difference, even if the pace of change is slow.

“I feel honored that in the early days we were asked to come to Washington because we were grieving families,” Barden said. “Now we are asked because of the good work we do at Sandy Hook Promise.”