Another Connecticut prison is bound for mothballs 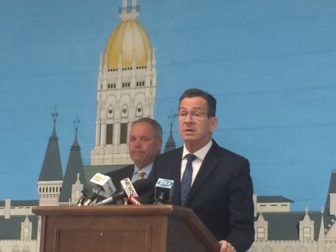 Gov. Dannel P. Malloy and Correction Commissioner Scott Semple announce another prison closing. They are standing before a mural of the Capitol painted by an inmate.

East Lyme – The Connecticut prison system shrinks again this weekend when the final two dozen inmates depart the Niantic Annex, a section of a century-old complex of prisons that was reopened in 2011.

In its latest iteration, the annex housed as many as 585 men who transferred there after the adjacent J.B. Gates Correctional Institution closed more than four years ago. As the annex is mothballed again, officials anticipate this closing will be permanent.

“This is the direct result of the lowest prison population in nearly 20 years and the lowest crime rate in nearly 50 years,” Gov. Dannel P. Malloy said, standing with Correction Commissioner Scott Semple in front of a mural of the Capitol painted by an inmate.

The facility is the fifth closed since January 2010 and the fourth since Malloy became governor a year later.

The remaking of the prison system – the product of a building boom 20 years ago as mandatory minimum sentences and the war on drugs contributed to an inmate population explosion across the U.S. – is a priority of Malloy’s.

The shrinking population has allowed not only the closings but the rededication of an empty prison in Somers as the Cybulski Community Reintegration Center, where inmates are prepared for reentry to society.

“We can anticipate making further progress, because fewer people are ending up in jail than any time in the past 25 years,” Malloy said. “It’s not just about what’s happened in the last six months or 12 months, it’s about what is a very solid trend and one that we are trying to increase in its velocity.”

New admissions have dropped 25 percent since 2009, and there were 1,429 fewer new admissions in 2015 than the previous year.

The contracting prison population is due to a mix of demographics – the state is growing older, and younger people commit a higher proportion of crime – and sentencing changes.

The facility closing this weekend sits on a sprawling 558-acre campus now dominated by York Correctional Institution, the state’s only prison for women. It has more than a century of history as the site of prisons for men and women.

J.B. Gates opened in 1917. A year later, the Connecticut State Farm and Reformatory for Women opened on the same grounds. It was later renamed Niantic Correctional Institution for women and now survives as York.

The closing is expected to save about $7.6 million in operating costs. Malloy said correction officers are being offered transfers to York, but the workforce also will contract through attrition. The closings are coming as officers hired more than 20 years ago during the system’s expansion are hitting retirement age.

Webster Correctional in Cheshire closed in January 2010. Shuttered on Malloy’s watch were Gates in the Niantic section of East Lyme in June 2011, Bergin in Mansfield in August 2011 and the Fairmount Building at Bridgeport Correctional Center in July 2015.