Obamas to put Malloy in spotlight at State of the Union 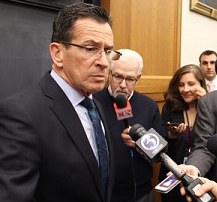 Washington – Gov. Dannel P. Malloy will be one of the most notable guests at Tuesday’s State of the Union speech, sitting with Michelle Obama.

In a statement, the White House said those invited to the first lady’s guest box this year “personify President Obama’s time in office and most importantly, they represent who we are as Americans: inclusive and compassionate, innovative and courageous.”

The White House said Malloy, who was present at the White House last week as the president outlined a gun-control initiative, was chosen for the honor because he “has pursued many of the progressive priorities that the President laid out to make America stronger.”

The White House also said Malloy “oversaw the successful implementation of the Affordable Care Act, driving down the state’s uninsured rate to historic lows and delivered the best job growth since the 1990s.”

“It’s truly an honor. I want to thank the president and the first lady for this once-in-a-lifetime invitation,” Malloy said. “We’re doing big things in Connecticut.”

The tradition of seating special guests with the first lady began with President Ronald Reagan, who seated Lenny Skutnik in the House galleries with his wife, Nancy Reagan. Skutnik was a Congressional Budget Office employee who dove into the icy Potomac River in 1982 to drag a woman to safety after a plane crash.

There are usually more than a dozen guests sitting with the first lady who’ve been vetted for months. The White House has invited 23 this year, including a Syrian refugee and Staff Sgt. Spencer Stone of the U.S. Air Force, one of the Americans who stopped a terrorist attack aboard a train in France.

One seat will purposely be left empty, “for the victims of gun violence who no longer have a voice – because they need the rest of us to speak for them,” the White House said.

Coming on the heels of a series of his new initiatives aimed at tightening federal gun regulations, Obama is expected to highlight the issue of gun control in his last State of the Union address.

The president is also likely to speak about his legacy. 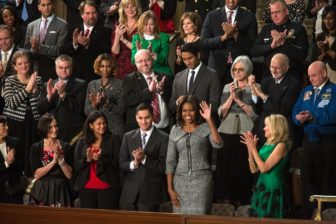 The White House said the president will speak of “the progress we have made since (he) first delivered this speech seven years ago – from the brink of a second Great Depression and two costly wars to an economy that is growing and renewed American leadership abroad.”

But the implementation of substantial changes in the gun laws, which requires congressional action, has frustrated the president, who kicked off his gun safety efforts after the Dec. 14, 2012, slaying of 20 first-graders and six educators at Newtown’s Sandy Hook Elementary School.

Connecticut’s lawmakers are also able to invite a guest to the State of the Union address. They will also sit in the gallery, but not in the first lady’s box.

Rep. John Larson, D-1st District, has invited Glastonbury resident James Tillman, who spent 18 years in prison after a wrongful conviction until DNA testing organized by the Connecticut Innocence Project exonerated him in 2006.  Larson helped push legislation through Congress last year that made compensation to the wrongly accused free of federal taxes.

Sen. Richard Blumenthal, D-Conn., a member of the Senate Armed Services Committee, has invited Michael J. Zacchea of Brookfield , a retired lieutenant colonel in the U.S. Marine Corps who has been awarded two Bronze Stars and a Purple Heart for his service in Iraq.

And Rep. Elizabeth Esty, D-5th District, has invited James Wardwell, chief of police for the City of New Britain.