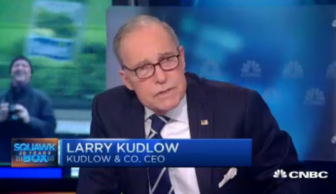 Larry Kudlow during an appearance on CNBC in December when he discussed his potential candidacy.

Baltimore, Md. — At a House and Senate Republican retreat in Baltimore Thursday, conservative commentator Larry Kudlow continued to keep people guessing as to whether he’ll challenge Connecticut Sen. Richard Blumenthal for his seat in November. But the pressure was on.

“I talked to quite a few senators,” Kudlow said. “They were very encouraging.”

Kudlow, 68, well-known in Republican circles as a CNBC contributor and free-market economist who once advised President Ronald Reagan, was invited by retreat organizers to host a panel on jobs and economic growth that featured NASDAQ Chief Executive Officer Robert Greifeld.

But whether Kudlow will have a political future was, too.

For now, Kudlow is coy about his plans, saying he’ll “put out [his announcement] by the end of February.”

“It’s a complicated process,” he said. “There are a lot of issues involved.” He and his wife Judith, he said, “are consulting a lot of people.”

But he said he’s happy with the political climate this year, which has baffled political experts who can’t figure out Donald Trump’s appeal and that of other non-traditional candidates.

The incumbent Blumenthal, who has represented Connecticut in the Senate since 2010, has already raised more than $4 million for his re-election. But Kudlow says campaign fundraising is not a problem.

He says one reason he isn’t concerned about playing catch-up is that Jack Fowler, Milford resident, publisher of National Review and Kudlow’s long-time friend, is already raising money to help elect him.

Fowler recently formed a PAC called “Jobs for Connecticut” to “test the waters” for Kudlow’s challenge to Blumenthal. “Apparently, they are doing very well,” Kudlow said.

Fowler said the PAC has collected “in the six figures,” over the last few weeks.

“It would take a lot of money to do this,” Fowler said. “But I do think Larry would be a national candidate. A lot of people know him.”

Host of the nationally syndicated “The Larry Kudlow Show” on WABC radio, and a familiar face on television, Kudlow has the name recognition many challengers lack, including August Wolf, a Republican businessman who announced his challenge to Blumenthal last year.

Kudlow has lived in Redding for 18 years, and once worked on Wall Street for Bear Stearns as the firm’s chief economist. But he was fired because he had developed a cocaine habit that Kudlow later admitted cost him $10,000 a month and impaired his work.

“Now he’s got years of clean living, and he’s been helping others, too,” Fowler said. “He’s the right man for the people of Connecticut.”

Kudlow’s challenge in Connecticut could provoke a shift in Democratic resources that might help a couple of Republicans in tight races elsewhere. There are 24 Republican Senate seats up for election this year, and only 10 Democratic ones, including Blumenthal’s.

And there are more competitive GOP Senate seats than Democratic ones this year.

That means that, as the head of the National Republican Senatorial Committee, Sen. Roger Wicker, R-Miss., has his work cut out for him this year. Wicker attended Kudlow’s panel discussion on jobs and the economy and spoke to him briefly.

He told him he wanted to talk to him again, at length, about his possible candidacy.

“This is still the Connecticut that Ronald Reagan carried when he ran for president,” Wicker said. “There is a candidate out there – and his name may be Kudlow – that can articulate an agenda for working, middle-class people in New England.”

Wicker believes there can be a reversal of a trend that has resulted in a decline in the number of GOP lawmakers from New England.

“Look at (Sen.) Susan Collins; she doesn’t squeak by in Maine,” he said. “She remains a mainstream member of the Republican conference. It can be done in New England.”

But even Kudlow’s backers concede running against Blumenthal – one of Connecticut’s most consistently popular politicians – will be tough.

“Blumenthal has had some very solid, positive numbers, and that’s not unimportant,” Fowler said. The Cook Political Report has placed Blumenthal’s race in the “solid Democratic” column.

‘The whole state is falling apart’

When Kudlow first indicated on his radio show that he might challenge Blumenthal, the issue at hand was national security. Kudlow said he would consider running if Blumenthal voted for a nuclear deal with Iran.

Kudlow has now shifted his line of attack. He is focusing on Blumenthal’s economic policies.

He said if he runs, he is going to make a campaign issue of the decision by General Electric and other companies to leave Connecticut – and assert that the state’s elected leaders are to blame.

“Where was Blumenthal?” he asks.

Meanwhile Blumenthal’s campaign has portrayed Kudlow as an out-of -touch, wealthy, Wall Streeter with ultra-conservative views and “a proponent of Donald Trump’s tax cuts for the rich.”

In fact, the senator’s campaign staff often uses the threat of Kudlow’s candidacy in its appeals for campaign cash.

“He’s an extremist’s dream candidate,” a recent one said.

Another Blumenthal appeal says, “With Kudlow about to announce, I need you to give $10 or even $5 tonight.”

Kudlow displayed his trademark passion when he spoke of what he sees as Connecticut’s economic problems.

Kudlow calls the decision by GE to move its headquarters from Fairfield to Boston “a tremendous body blow” to the state and a result of a hostile business environment.