A HUD secretary touts a new promise to a poor city 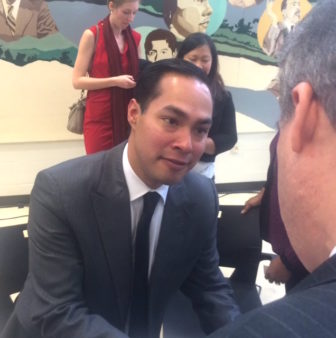 Hartford — President Obama’s secretary of housing and urban development, Julián Castro, dropped in Friday on 06120, one of the poorest zip codes in the United States, a place where the latest federal anti-poverty programs go to be road-tested.

So it is with the North Hartford Promise Zone, a designation granted in April to about three square miles of unrealized promise. The poverty rate is nearly 50 percent, average per-capita income is $12,000 and fewer than 40 percent of residents have a high school degree.

“That word promise has a lot of negative and positive connotations,” said U.S. Sen. Chris Murphy, who hosted the visit with his colleague, U.S. Sen. Richard Blumenthal. “There have been a lot of promises made, and the question is whether there is action coming on the back end.”

Castro, 41, the former mayor of San Antonio, is a political celebrity of a sort, a man deemed to have promise. HUD secretary for not quite two years, Hispanic groups are pushing him for vice president, and he appeared earlier this week on “The Late Show with Stephen Colbert,” where the host teased about Castro’s inability to fluently speak Spanish.

For an hour, he sat at U-shaped table in a community center with the two senators, Hartford’s new mayor, Luke Bronin, other elected officials and some of the men and women responsible for delivering services in 06120 for a scripted roundtable discussion.

The senators’ last roundtable in 06120 was about gun violence after the Sandy Hook school massacre, and it veered off message as a street minister in the audience loudly chastised the senators and other elected officials for being absent on the issue until it reached into a suburban school.

There were no audience questions Friday. The Hartford event lasted precisely an hour, then Castro left for events in New Haven and Bridgeport.

Castro said he came to listen, but he told the audience of political leaders and representatives of community groups, including many that provide direct services to the neighborhood, that “connectivity,” a holistic approach to urban ills, is central to Promise Zones.

“The Promise Zone effort is an effort that President Obama is very proud of and one that all of us in the administration are determined that we see concrete improvements to Promise Zone areas by the time we walk out the door on Jan 21,” Castro said.

That is the date in 2017 when Obama leaves office.

Winning a Promise Zone designation gives a locale priority status for federal grants and aid. The premise is a working partnership, the feds working with local leaders on economic growth and education, in HUD’s words, to “leverage private investment, reduce violent crime, enhance public health and address other priorities identified by the community.”

So far, it has brought three grants totalling $1.6 million to the zone, the biggest a $1.1 million award for fair-housing initiatives. Other grants are pending, including one to assist juvenile criminal offenders who find limited housing opportunities upon release.

Bronin, 36, who took office on New Year’s Day, was unsubtle in pushing for more. He highlighted an application pending at the U.S. Department of Labor for funding for youth jobs.

“That’s another one we’ll put in the bundle,” Blumenthal said, referring to a package they were preparing for the secretary. “You don’t have to take notes.”

Castro was asked after the roundtable if Promise Zone will outlive the administration.

“I’m confident that if we work feverishly to produce results in our Promise zones in this next year, that’s going to make it all the more likely that they’ll continue, because folks can measure the good work that is happening.”

Blumenthal said the program has strong support in Congress.

Castro laughed when asked how a HUD secretary became a guest on “The Late Show,” where Promise Zones were not fodder for conversation.

“You have a right to remain silent,” Blumenthal said.

“It was all in good fun,” Castro said.