On MLK Jr. Day, a look in Connecticut at challenges ahead 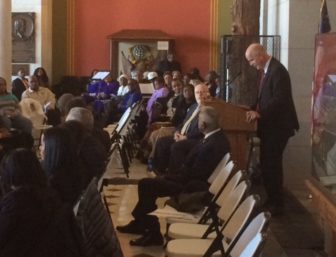 A suburban pastor recalled Monday how Connecticut was the place where a teenaged Martin Luther King Jr., first escaped the Jim Crow laws of the racially divided South, a bittersweet experience that would profoundly shape King’s view of racial injustice in America.

But George Harris, the new pastor of the First Church of Christ in Simsbury, where King worshipped during two summers as a farm laborer earning tuition for college, told an audience at the State Capitol that the 30th observance of the Martin Luther King Jr. holiday was no time for “mere remembrances.”

“The last couple of years have ripped away the veil obscuring persistent racism and have revealed the lie of post-racial America,” Harris said, invoking racial profiling, inequities in education and employment, and the deaths of unarmed black males in encounters with police. “The view from the mountaintop today reveals a deeply divided and persistently racist America.”

Simsbury was an agricultural village when King arrived in the summer of 1944, a precocious 15-year-old already accepted to Morehouse College. The college sent students north every summer to tend to the shade tobacco that grew under gauzy white canopies.

In his autobiography, King described his summers in Connecticut as transformative, if only for the unrestricted access he enjoyed to public accommodations on the way north and during his stay there.

“After that summer in Connecticut, it was a bitter feeling going back to segregation,” King wrote. “It was hard to understand why I could ride wherever I pleased on the train from New York to Washington and then had to change to a Jim Crow car at the nation’s capital in order to continue the trip to Atlanta.”

Today, a trial is underway in Hartford, where King marveled at being able to dine in any restaurant and see a show on his day off, that explores the inequities in public education offered in Connecticut’s struggling cities and its wealthier suburbs. 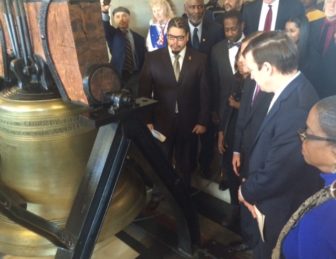 Tanya A. Hughes, the executive director of the Commission on Human Rights and Opportunities, said Connecticut has led more than it has followed on issues of civil rights. Her agency, the first of its kind in the U.S., was formed in 1943, the year before King arrived in Simsbury.

The administration of Gov. Dannel P. Malloy is now taking the lead on criminal justice reforms with his push to end racially disparate sentencing and to provide an easier path to community re-entry for those who run afoul of the law, she said.

Malloy said the holiday, which this year falls three days after what would have been King’s 87th birthday, is a day to look forward to challenges, not back on accomplishments King helped deliver.

“It’s the next level. It’s the next extension of Martin’s work. We cannot sit back and celebrate on a day like this victories that we had simply in the past,” Malloy said. “We have to understand that much works remains to be done if we’re going to be the people that Martin Luther King thought we could be.”

King was assassinated April 4, 1968, during a trip to Memphis, Tenn., in support of black sanitation workers on strike to protest the unequal wages paid to blacks and whites by the administration of the city’s white mayor.

“This is a day when we rededicate ourselves to the coming year to do all that we can to reach that level of justice that we know, we as Americans, our country is capable of. And yes, black lives matter. Our children matter. Our safety matters,” Malloy said.

Lembo, who is gay, white and the adoptive father of three black sons, now ages 30, 29 and 16, told the crowd that his family is of multiple communities, an experience both jarring and enriching.

“But in moments of crisis and strife, my communities sometimes stop talking to one another. In particular, I’ve got a hard time explaining to some of my white friends the fear and concern I have as the father of a black man when he’s out and about in the world in a way I can’t protect him,” Lembo said. “While those conversations are sometimes difficult, I have a responsibility to have those conversations nonetheless.”

He then challenged his racially diverse audience.

“Likewise, if we are truly a community, we need to talk to one another. And any conversation that ends in the phrase, ‘You’ll never understand,’ cannot be the end of the conversation, please.”

He was interrupted by applause.

Lembo said he would take the long weekend to catalogue his year: to review his own position of privilege and how it colors his view of the world; to repent for the times he chewed on his words rather than spoke out; and to assess where he made a positive difference or missed opportunities to “lighten another’s load or speak truth to power.”