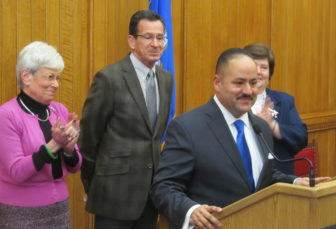 The administration of Gov. Dannel P. Malloy scrambled Wednesday to frame the resignation of Andres Ayala Jr., the Democratic governor’s first Hispanic department head, as anything other than an attempt to solely blame him for a troubled tenure as commissioner of motor vehicles.

Ayala, a former state senator from Bridgeport who quit the legislature to join the administration a year ago, resigned Tuesday night, and his departure was confirmed Wednesday after it was first reported by The Hartford Courant.

At an event at Bradley International Airport to announce the resumption of direct flights to Los Angeles, the governor said Wednesday afternoon that he did not seek Ayala’s resignation.

“He volunteered it. I’ve had a great working relationship with the commissioner,” Malloy said. “It’s been a tough year for him.  I think he’s done a good job, as good as he could do, and I think it was an opportune time for him to leave at this point.”

Earlier, the governor’s press office issued a laudatory statement from the governor about Ayala.

“The commissioner is a dedicated public servant to Connecticut, and I appreciate all of the work he’s done in so many different capacities both at the local and state levels,” Malloy said in a prepared statement. “I want to thank him for his service and for his unwavering dedication to improving our state.”

But Ayala’s departure comes after a string of miscues, including a chaotic resumption of service after a weeklong shutdown to activate a new computer system planned by his predecessor, Melody Currey, who left the post to become the commissioner of administrative services.

“The chronic foul-ups that have plagued the Department of Motor Vehicles and created great hardship and angst for motorists continue to this day. While Commissioner Ayala has responded to our office regarding constituent complaints, the problems remain,” Klarides said.

“Andres Ayala tried his best at a very difficult time for the DMV. I believe he put in great effort, but unfortunately the challenges were far greater than anticipated,” Fasano said. “During his time in the state Senate Ayala was a dedicated lawmaker who always worked hard to make sure the voices of his constituents were heard at the Capitol.”

The Courant reported that at the time of Ayala’s resignation it was pursuing a story about the circumstances of the hiring at DMV of a Bridgeport resident who had pleaded guilty to felony drug charges in 2006 and served time in prison.

Malloy was unsure if there were any concerns with the hire, referring questions to his chief of staff, Brian Durand, who later told The Mirror there were no plans to rescind the man’s appointment to a clerk-typist position.

“Commissioner Ayala’s successor will make decisions about his or her appointed staff,” Durand said.

Malloy has yet to name an interim commissioner.

With a political base in Bridgeport, the state’s largest city, and Ayala’s status as the highest-ranking Latino in state government, the resignation was treated Wednesday as a matter of great sensitivity. Administration officials were making phone calls assuring Ayala’s allies that no effort would be made to make him a scapegoat for all the ills at the DMV.

Ayala, who could not immediately be reached for comment, gave up a Senate seat and a job as a teacher in Bridgeport after winning re-election in 2014 to join an administration beginning its second term in January 2015. He had declined a job offer from Malloy during the governor’s first term.

His appointment was a major event in Latino political circles, even if it meant an end, or at the very least, an interruption in the political career of the first urban Latino elected to the Connecticut Senate.

“We have been in conversation with the governor about that a long time. Gov. Malloy has told us he has attempted to get other Latino leaders to top positions. Unfortunately, the persons he has recommended have turned him down,” Werner Oyanadel, the executive director of the Commission on Latino and Puerto Rican Affairs, said the day Ayala was appointed. “So, we commend him today for his appointment.”

The Hispanic community unsuccessfully lobbied Malloy to name Nivea Torres, the superintendent of the 11,200-student State Technical High School system, as the next commissioner of education. But the governor did appoint another Latino commissioner a month later: Jorge Perez, a community banker and the president of the New Haven Board of Alders, was named banking commissioner.