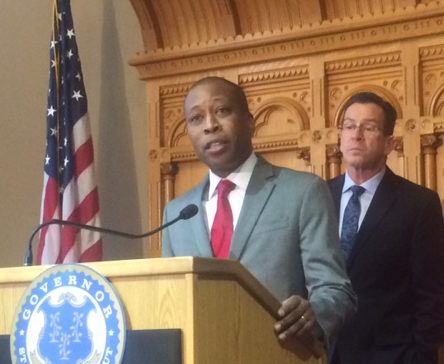 Scott Jackson is the governor’s choice to be the next commissioner of labor.

Gov. Dannel P. Malloy is breaking with long practice by going outside the ranks of organized labor for a new commissioner of labor by naming former Hamden Mayor Scott Jackson, one of three personnel moves the administration made Monday.

Dennis Murphy, the deputy commissioner of labor, whose relationship with Malloy reaches back to the governor’s tenure as mayor of Stamford, is being reassigned temporarily to oversee the troubled Department of Motor Vehicles. He previously was dispatched to the Board of Regents as chief of staff during a tumultuous change of leadership.

Kurt Westby, a former union leader who was in the pool of candidates for labor commissioner when Malloy took office in 2011, is to succeed Murphy as deputy commissioner, giving Jackson a top aide with strong union ties. Westby was the state director of 32BJ, an affiliate of Service Employees International Union.

Jackson will succeed Sharon Palmer, the former high-ranking official of AFT-Connecticut and the AFL-CIO who retired this month. Murphy follows Andres Ayala Jr., who resigned last week at DMV. Jackson’s wife is a labor organizer.

Jackson, a Democrat who was Hamden’s first black mayor, left city hall last year to join the Malloy administration as the undersecretary for intergovernmental policy at the Office of Policy and Management. He took the job after completing work as the chairman of the governor’s Sandy Hook Advisory Commission.

His appointment is subject to confirmation by the General Assembly.

Malloy acknowledged the break with tradition in selecting a labor commissioner whose labor-management experience has been on the management side. In addition to being mayor, Jackson previously was Hamden’s chief administrative officer.

But the governor said his previous team of Palmer and Murphy, who oversaw labor relations for city administrations in Stamford and Bridgeport, was a mix of labor and management.  He called it a “one from column A and one from column B” approach.

“We have historically had one from column A and one from column B in the commissioner/deputy commissioner role and that’s the practice we’ll continue to have,” Malloy said. “I have great faith in both these folks. So, it really doesn’t represent a change inasmuch as it really represents a continuation of a policy that I’ve had.”

Malloy said he is not aware of any objections from labor over its representative ending up in column B.

As acting commissioner, Murphy will be joining a DMV in turmoil. Ayala, a former state senator from Bridgeport who was the first Latino department head in the Malloy administration, resigned last week as commissioner after a year plagued by troubles, including a failure of a new computer system.

“Dennis is exceptionally smart, driven, and capable.  He has the management abilities to lead the agency until we find the right person to fill this important role on a permanent basis,” Malloy said in a statement confirming the appointment. “He has been an outstanding public servant, and I thank him for taking on this job.”