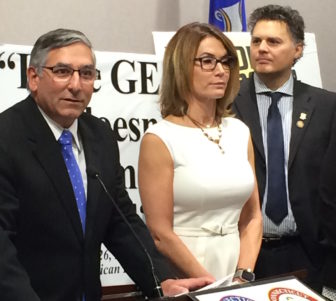 Republican legislators offered a blueprint Monday to curb future state spending by, among other things, no longer guaranteeing worker retirement benefits by contract.

The plan offered by minority Republicans in the House and Senate also recommends:

“Connecticut is stuck in a fiscal fiasco and it’s time for serious changes in the way our state budgets,” said Senate Minority Leader Len Fasano, R-North Haven, who cited major deficits projected for each of the next three fiscal years, declining state income tax revenues, and GE’s recent announcement to move its global headquarters to Boston. “… We have to plan ahead. We have to budget for generations, not elections.”

Though the current fiscal year faces a shortfall equal to a fraction of 1 percent of the general fund, nonpartisan analysts are tracking larger deficits on the horizon.

Over the next three fiscal years combined, state finances are on pace to run a combined $4.1 billion in the red.

“We have got to get out of this ‘This is how we have always done it’ mentality,” Klarides added.

One key segment of the GOP plan focuses on labor costs, which consume roughly 35 percent of the budget.

One of the most dramatic proposals would bring Connecticut into line with most other states in how it guarantees retirement benefits.

Connecticut should commit now to ending its longstanding practice of guaranteeing benefits by contract when the current contract with worker unions expires in mid-2022, Republicans said.

Benefits still would be offered by statute, but the GOP also acknowledged this would give Connecticut greater flexibility to reduce or end pensions and retirement health care if they become unaffordable.

A spokesman for the union that represents over 33,000 state and municipal workers, said the GOP plan represents an unprecedented attack on labor similar to the controversial “Wisconsin Budget Repair Bill” of 2011.

“The Republican leadership (in Connecticut) clearly would prefer to propose a special tax on middle-class employees who work for the state rather than fairly tax individual and corporate wealth,” said Larry Dorman, spokesman for Council 4 of the American Federation of State, County and Municipal Employees.

“This is designed to punish working-class people and to protect those who need to step up and pay their fair share,” Dorman added. “We’ve seen in Wisconsin that those policies have failed. They have hurt the economy. They have hurt the middle class.”

Democratic legislative leaders accused their Republican counterparts Monday of embracing the negative side of politics as they prepare for Wednesday’s opening of the 2016 regular General Assembly session.

“Unfortunately, I believe that going forward we will only hear more fear, misinformation and bombast from Republicans, who seem intent on tearing down all that is promising and successful in Connecticut in the name of politics,” said Senate President Pro Tem Martin M. Looney, D-New Haven.

“Meeting the current fiscal challenges is always the priority of the short legislative session, and I look forward to working in a bipartisan manner to keep Connecticut’s economy moving forward, and I hope the minority party contributes constructively toward that goal,” House Speaker J. Brendan Sharkey, D-Hamden, said. “We all agree it is critical to bring more predictability and sustainability to the overall budget over time, and structural changes are the only way to make that happen. That’s why I am disappointed the Republicans, on the eve of a new session, have chosen to revert to their tendency to point fingers instead of leading.”

The GOP also took aim Monday at Connecticut’s use of its credit card.

General obligation bonding, which is paid off using income and sales tax receipts and other revenues assigned to the general fund, has swelled dramatically in recent years.

Though it was used primarily to fund municipal school construction, open space and farmland preservation, state building renovations and pet projects in legislators home districts, hundreds of millions of dollars in borrowing has been added in recent years to cover operating costs normally handled in the budget.

GOP lawmakers also said they would support an amendment to the state Constitution to create a “lockbox” mechanism to protect transportation funding.

But they also insisted it has to be stronger than the “lockbox” proposal that was offered during last December’s special legislative session. That proposal passed, but lacked enough support to go on this November’s ballot. It must be reconsidered by the 2017 legislature and approved again before it could go before voters.

That “lockbox” proposal would have guaranteed only that existing revenues designated for transportation continue to be used for that purpose in the future.

Any new revenue from gasoline tax increases or the return of tolls — if enacted after the lockbox’s establishment — could be spent on non-transportation programs.

Other Republican proposals include:

Though Republicans didn’t offer cost projections for their proposals Monday, the overall package, based on earlier forecasts, would save hundreds of millions of dollars annually once fully implemented.

Malloy, who has been pressing for a “lockbox,” questioned the GOP’s commitment to transportation.

“A vote against the lockbox is a vote for inaction — you are either for transportation improvements, or you’re against them,” Chris McClure, a spokesman for the governor’s budget office, said. “Opposition to it advances a goal of more deterioration, more traffic and congestion, and an antiquated infrastructure that won’t allow us to compete.”

The administration didn’t address the specifics of the other Republican proposals.

“Let’s focus on solutions for the future and leave the politics behind,” McClure said. “We know that no one party, no one leader, and no one individual holds a monopoly on good ideas. The focus should be putting ideas on the table.”