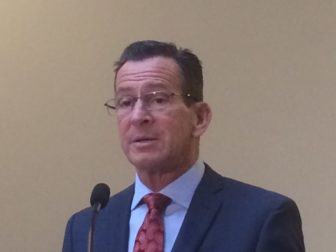 Gov. Dannel P. Malloy would spend $720 million less than what’s necessary to maintain current services next fiscal year, but his new plan, due to the legislature Wednesday, won’t say how about 40 percent of that reduction would affect specific programs, according to an administration presentation.

A slide presentation delivered late last week to legislative leaders also shows the governor’s new plan for the 2016-17 fiscal year would cut 5.75 percent from all agency budgets and non-education aid to towns, according to a copy obtained by The Mirror.

Overall spending in next fiscal year’s general fund also would be down almost $570 million below the preliminary 2016-17 budget enacted last June.

The bottom line for the Malloy plan, including resources for the Special Transportation Fund and other specialized funds, would be spending of $19.87 billion.

In recent years, Malloy and the legislature also have shifted hundreds of millions of dollars in spending from the budget to off-budget sources. Technically these are considered cuts to the budget, even though the spending continues from another source. It was unclear from the slide presentation whether Malloy is recommending shifting any funds next fiscal year.

Administration officials have said full details of the governor’s presentation will be released Wednesday, when the governor’s full plan is delivered to the General Assembly.

According to the slide presentation, $90.5 million in savings next fiscal year would be achieved by continuing cost-saving measures implemented this fiscal year in a deficit-mitigation bill the legislature passed in special session in December.

Another $118.2 million will come from “specific budget recommendations” to be released on Wednesday.

But nearly $361 million in reductions from the original 2016-17 budget will be achieved by cutting 5.75 percent from all agency budgets, and from all municipal grants excluding the Education Cost Sharing (ECS) program.

Connecticut provides about $1.1 billion in non-ECS grants. And even though a minority are paid for with borrowing — outside of the state budget — a 5.75 percent cut to the remainder would be slightly more than $50 million.

That still leaves more than $300 million to come from agencies’ discretionary accounts.

Salaries and benefits largely are fixed by contracts. And though the Democratic governor has said he hopes to reduce the state workforce by 500 to 600 employees over the next year, much of those across-the-board cuts would come from programs and services.

The legislature’s nonpartisan Office of Fiscal Analysis projects annually the level of spending needed to maintain current services — a methodology the Malloy administration has questioned increasingly in recent years.

The governor’s budget director, Benjamin Barnes, has said the number is distorted both by assumptions of necessary inflationary increases and by statutory promises of additional municipal aid that routinely are waived year after year.

The administration is recommending a new approach to state budgeting with this proposal, one which would give agencies much greater discretion to apportion the funds in their respective budgets.

In previous gubernatorial budget proposals, recommended cuts or increases in each specific agency or departmental line item were reported.

Leaders of the Republican minorities in the House and Senate, Themis Klarides of Derby and Len Fasano of North Haven, both questioned whether legislators would embrace an approach that did not detail how specific programs would be affected.