On opening day, moments for Backer, Gresko and Maynard

Press savvy: Joe Gresko lowers the microphones to allow photographers a clear view of his swearing in. At right: Secretary of the State Denise Merrill and Speaker J. Brendan Sharkey

The House of Representatives saluted a departed colleague, Terry Backer, and welcomed his successor, Joe Gresko, on the opening day of the legislature’s annual session Wednesday, while Sen. Andrew Maynard, D-Stonington, returned amid questions about his ability to serve.

Maynard’s surprise return last year – after a traumatic brain injury that left him unable to campaign and limited his ability to speak – was welcomed by hugs, tears and sustained applause. On Wednesday, his return after a recent accident in which he flipped his car was uneventful.

The senator has declined interview requests for the past year, leading his local newspaper, The Day of New London, to challenge him in an editorial and columns to show he is capable of representing eight towns in the southeast corner of Connecticut.

“I’ve had conversations with Andy over the last few months, talked to him since the motor vehicle accident he had. He seems engaged,” Senate Majority Leader Bob Duff, D-Norwalk, said Wednesday. “He seems like he wants to be up here and be fully part of the legislative process, and I believe he is going to do that.”

Duff said he did not know if Maynard sustained any injuries in the car accident that would cause a setback in his recovery from the brain injury in 2014, when he fell down a flight of stairs outside his home. Maynard did not attend Gov. Dannel P. Malloy’s speech to a joint session of the General Assembly. 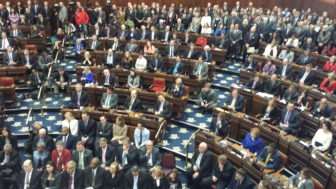 In the House, members rose for a moment in silence in memory of Backer, who died in December after a recurrence of the brain cancer first diagnosed several years ago. A little after 1:30 p.m., Gresko took the oath of office, formally succeeding his friend as the representative from the 121st District of Stratford, near the western end of Long Island Sound.

Gresko, a former journalist who has been a press aide for the House majority in recent years, won a special election the previous day. His audience laughed when he showed his press training by lowering microphones before taking the oath on the speaker’s rostrum in the House, knowing they would spoil photographs.

“I’m sure that I have big shoes to fill, and with all your help, I plan on doing my best. And I think Terry is smiling down on us today,” Gresko said after Secretary of the State Denise Merrill administered the oath. “It was a very touching moment of silence that you had for him, but also hopefully a successful passing of the torch.”