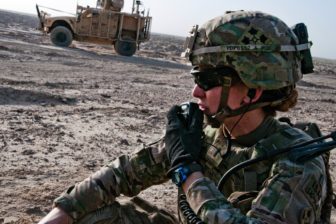 U.S. Army 1st Lt. Elyse Ping Medvigy conducts a call-for-fire during an artillery shoot south of Kandahar Airfield, Afghanistan, in 2014. Medvigy was the first woman company fire support officer to serve in an infantry brigade combat team in the war in Afghanistan.

Washington – Sen. Richard Blumenthal and Rep. Joe Courtney, both members of armed services committees in Congress, say they are open to requiring young women to sign up for the draft.

“As the role of women in the military continues to rapidly evolve, I think Congress needs to seriously evaluate whether or not the time has come for women to stand alongside men and register for the draft,” Courtney said. “I expect a robust discussion on this issue in the House Armed Services Committee this year, and will keep an open mind on the benefits and possible drawbacks of this change as this debate unfolds.”

The issue of whether young women should be required, as young men are, to register for the draft took off this week after two senior military officials raised the issue.

At a Senate Armed Services Committee hearing this week, Army Chief of Staff Gen. Mark Milley and Marine Corps Commandant Gen. Robert Neller said full integration of women into all jobs in the military, including combat roles, will take a few years.

At that point, the military officials said, women should be required to sign up for the draft.

“It’s my personal view in light of integration that every American physically qualified should register for the draft,” Neller said.

Milley agreed, saying all eligible men and women should be required to register.

Other Pentagon officials were more cautious.

Navy Secretary Ray Mabus Jr. said there needs to be “a national debate.”

Defense Secretary Ash Carter announced in December that the Pentagon would lift all gender-based restrictions on military service last month.

That has angered some Republicans, including Rep. Duncan Hunter, R-Calif., who is forcing the issue.

He introduced a bill this week that would require women from 18 to 26 years old to join men in registering with the Selective Service program.

“If this administration wants to send 18, 20-year-old women into combat, to serve and fight on the front lines, then the American people deserve to have this discussion through their elected representatives,” Hunter said in a statement.

Hunter also said, “it’s  unfortunate that a bill like this even needs to be introduced” and that he “might very well vote against it” if it is considered during the annual defense authorization process.

Selective Service law now says “male persons,” aged 18 to 25,  must register and be eligible for the draft. For women to be required to register with Selective Service, Congress would have to amend the law.

Courtney said, “With nearly all gender restrictions for military service now wiped out, including those preventing women from serving in combat roles, it’s a fair question to ask whether or not women should be asked to begin registering for the draft.”

“I have long been supportive of breaking down barriers which prevented women from voluntarily serving in many military positions, including aboard submarines,” he said.

Blumenthal, a member of the Senate Armed Services Committee, said he also has long supported the integration of women in combat positions.

“With female service members shattering glass ceilings and doing jobs previously limited to men, the next step in military integration possibly may be that all eligible men and women register with the Selective Service,” Blumenthal said. “I am open to considering requiring women to register as part of a comprehensive Selective Service reform to ensure that, in the remote possibility of a draft, our military is fully prepared.”

With an all-volunteer military, the draft has not been used since the 1970s. But it has been challenged.

The 1981 Supreme Court decision, Rostker v. Goldberg, held that registering only men did not violate the due process clause of the Constitution because of the Pentagon’s former ban on women in combat roles. But that ban no longer exists.