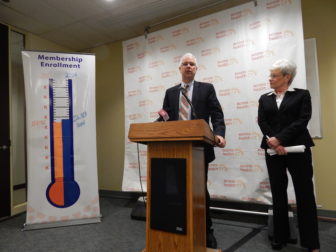 Access Health CEO Jim Wadleigh and Lt. Gov. Nancy Wyman, chairwoman of the exchange’s board, at a press conference Monday.

In all, 116,019 Connecticut residents signed up for private insurance through the state’s health insurance exchange, Access Health CT, during the open enrollment period that ended last week, officials said Monday.

That figure is slightly higher than the 110,095 who signed up during last year’s enrollment period and exchange officials’ goal for this year of signing up 105,000 to 115,000.

In addition, approximately 41,000 people applied for Medicaid through the exchange during the open enrollment period, which ran from Nov. 1 through Feb. 1. Another 217,000 people renewed their Medicaid coverage through Access Health.

Among those signed up for private insurance coverage, 78 percent – 90,615 people – will receive federal financial assistance to discount their premiums.

As of Monday, some of those who signed up – 21,470 households, which can include more than one customer – still needed to verify certain information to remain eligible for their financial assistance, Access Health spokeswoman Kathleen Tallarita said. Customers generally have 90 days from the time they sign up to reconcile any discrepancies between the income they reported when signing up and the information the exchange gathered from federal sources.

In previous years, the end of the open enrollment period has represented a high point in enrollment, with the number of customers dropping during the year. Last year, there was significant flux, with thousands of people dropping off or signing up outside the usual enrollment period. While people can sign up outside the open enrollment period if they go through certain life changes that affect their coverage or eligibility for financial assistance – for example, losing a job, getting divorced or getting married – the exchange had not verified people’s reasons for signing up off-season in the past. Going forward, people will need to show they have a qualifying reason for signing up midyear, exchange CEO Jim Wadleigh said last month.

Insurer ConnectiCare expanded its lead in the exchange market, with 53 percent of individuals who bought their plans through Access Health, up from 42 percent last year. Among those who signed up for 2016 coverage, 33 percent chose Anthem Blue Cross and Blue Shield, while just under 12 percent picked HealthyCT and 1.6 percent selected UnitedHealthcare.

Customers with the lowest income levels can sign up for silver plans that have federally subsidized deductibles and copayments, allowing them to pay less when they get care than if they had picked a gold plan.

While exchange officials touted the sign-up figures, they said there’s more work to be done in ensuring that customers use their coverage to get preventive care. A survey of exchange customers conducted in mid-2015 found that 28 percent did not have a primary care physician and 36 percent had not used their insurance plans. Wadleigh said key priorities this year will be emphasizing wellness, preventive care and making sure people know how to use their plans.

“This year is going to be key for that,” he said.

According to Access Health, 19,499 of those who signed up were new customers – that is, they did not have a user account with the exchange before Nov. 1.

About 1,000 of those who received subsidized coverage in the past won’t be eligible for the discounts this year because they did not file tax returns for 2014, as the health law requires. Wadleigh said the exchange has been getting 10 to 20 calls per day from people asking about 2014 taxes, suggesting many of them are trying to file their taxes to restore their subsidy eligibility.

This story was updated at 6:50 p.m. to correct the percentage of customers who picked HealthyCT plans.