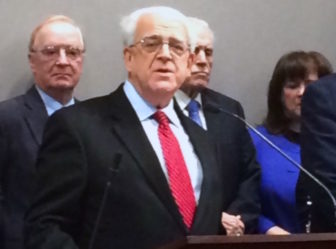 But they also warned that without an even harder, bipartisan push to control spending, businesses will remain reluctant to grow — or to support the tolls and gasoline tax hikes recommended to finance transportation improvements.

Leaders of the state’s eight major chambers of commerce and of the Connecticut Business and Industry Association, who gathered in the Legislative Office Building, also said they wrote to the governor Tuesday pledging to help his administration and the legislature develop cost-saving ideas.

There are signs of “an emerging consensus on the need to control spending” at the Capitol and “a collaborative effort (now) will send a clear signal” to the private sector that the signs are real, said Paul Timpanelli, president of The Bridgeport Regional Business Council.

CBIA President Joseph F. Brennan said he and other business leaders told Malloy last year that “if we got killed on the tax side, it would be very hard to go back to our members” to support the gasoline tax hikes and tolls probably needed to fund the governor’s 30-year transportation enhancement plan. “And we did get killed on the tax side.”

Malloy and the legislature originally negotiated a new biennial budget last June that would have raised taxes $1.5 billion over two years and canceled close to $500 million in previously approved tax cuts.

Some last-minute revisions trimmed the tax hikes below $1.35 billion.

And a December special session closed a mid-fiscal-year deficit without taxes.

Brennan said those both are very encouraging signs, as was the revised $19.87 billion budget Malloy proposed last week for 2016-17, which closed another projected shortfall without tax hikes.

But Brennan said those are only initial steps, with much more work remaining to reduce state spending.

Standing in the way of that goal, though, are rapidly rising costs for public-sector retirement benefits that Connecticut failed for decades to save properly for before 2011.

Because those costs largely are fixed, that means cuts are more likely to fall hard on sensitive areas such as education, health care and social services.

Business leaders respond that they know spending reforms will take time and hope Malloy and the legislature will work with business leaders to produce change that will save big money over time.

“We gather as one voice, not to complain, but to advocate for policies … that will improve the competitiveness of Connecticut,” said John R. Ciulia, president of Webster Bank and Webster Financial Corporation.

What are those policies?

Business leaders again urged state officials to revisit six reports prepared five years ago by a business coalition known as The CT Institute for the 21st Century. The coalition prepared a series of white papers outlining strategies to control spending growth in several areas, including prisons, long-term heath care, public-sector benefits, and use of technology to deliver public services.

The chambers and CBIA also called on legislators and Malloy to craft an enforceable constitutional spending cap, and to develop a new constitutional amendment to protect all revenues earmarked for transportation from being diverted for other purposes.

Attorney General George Jepsen issued an opinion in mid-November that the spending cap Connecticut has followed since 1991 carries no legal authority because of the legislature’s failure to formally implement the constitutional amendment.

The idea of a transportation “lockbox” amendment bogged down in last December’s special session. House Republican lawmakers noted the “lockbox” Malloy and the legislature’s Democratic majority had crafted only would lock in existing revenues earmarked for transportation.

Any gasoline tax hikes and toll fees for the governor’s 30-year enhancement plan — which aren’t expected to be debated until 2017 — would be established outside of the lockbox.

R. Nelson “Oz” Griebel, president of the MetroHartford Alliance and a member of the governor’s Transportation Finance Panel, said establishment of a “working” lockbox is important for business support for transportation investment.

Both he and Brennan said that, coupled with clear signs that state taxes probably will remain more stable and predictable in the future, would go a long way.

“Spending discipline is at the heart of this,” Griebel said, adding that the tax system must work in conjunction with budgetary controls “that follow the original intent of the spending cap.”

“I think everyone in our membership agrees we need greater investments in transportation infrastructure” Brennan said. “We’ve just got to figure out the proper way to finance those without doing greater damage to our economy.”