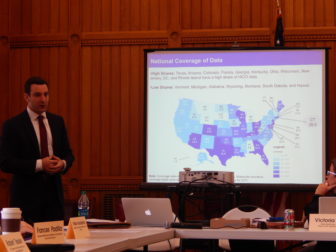 But when his father was very sick, Cooper said he wanted him to go to a large medical center that treated a high volume of patients with the same condition.

“There’s this tension. On the one hand, we like big organizations,” that can provide amazing health care, Cooper, a Yale health policy and economics professor, told state policymakers Tuesday. “But some of these big organizations get bigger and they abuse market power. How do we reconcile that?”

Cooper spoke Tuesday to Connecticut’s Health Care Cabinet, a group of state agency leaders, representatives from provider groups and others that has been charged with finding ways to address health care costs, increase market competition, and improve care quality.

Their work comes at a time of public wrangling over consolidation in Connecticut’s health care landscape, particularly the growth of large health systems that control multiple hospitals and physician practices.

Maritza Bond, executive director of the Eastern Area Health Education Center, told cabinet members Tuesday about service reductions at Windham Hospital since it was acquired by the five-hospital Hartford HealthCare system. A woman who had a stroke had to be taken by helicopter to Hartford Hospital because no neurologist was available at Windham, Bond said.

Others, including representatives from two unions, told the cabinet they were concerned that plans by New London’s Lawrence + Memorial Hospital to join the Yale New Haven Health System could lead to higher prices and reduced access to care.

Cooper noted that health care is changing: In the next 50 years, there will probably be fewer hospitals, more specialization in care and bigger organizations delivering it.

The answer to the tension he cited isn’t to block every hospital merger, he said. But he suggested it could involve more price transparency and making patients more comfortable with the idea of traveling farther for medical services.

“I think the real action in this space is basically going to be making consumers more price sensitive,” Cooper said – not making them pay a larger share of the bill, but finding ways to encourage patients to seek out better, less-costly care. “We [could] tell patients, you can travel further, that it isn’t terrible to go 30 minutes further to save $1,000 and get better care.”

The price of a car, every year

Cooper began with an explanation of why focusing on health care costs matters: The price of health insurance – which people are now required to buy under the federal health law – averaged $17,545 for a family of four last year, enough to buy a Toyota Corolla. And some with insurance still struggle to pay their medical bills.

Cooper’s recent study has drawn significant attention, as well as some pushback about its methods and conclusions. It was based on an analysis of claims data from Aetna, UnitedHealthcare and Humana that covered about 28 percent of privately insured U.S. residents. He and co-authors Stuart Craig, Martin Gaynor and John Van Reenen examined the prices paid to hospitals for seven medical services, and found substantial variation – both among and within geographic areas.

A knee replacement at one hospital in Atlanta can cost six times more than at another hospital in the same area, they found. Price variation was lower in Connecticut, but two of the three regions of the state were deemed to have above-average spending for both Medicare and private insurance – the Bridgeport region, which includes portions of the state southwest of Bridgeport, and the New Haven area, which includes Danbury, Waterbury and New London.

When it comes to private insurance, the biggest factor in spending variation is price – which is determined by negotiations between insurers and hospitals – rather than the amount of services patients use, the authors found. And they wrote that hospital market structure “stands out as one of the most important factors associated with higher prices, even after controlling for costs and clinical quality.”

(While the study found that market structure and price were associated, it did not show that one caused the other.)

What about other factors, like differences in care quality, fancy amenities at certain hospitals, local costs, hospital size or status as a teaching hospital? Or lower payment rates from Medicare and Medicaid, the so-called “cost-shift,” which many hospital officials say leads to higher private insurance prices?

Some economists and the commission that advises Congress on Medicare policy say the prices private insurers pay can’t be blamed on government payment rates, and Cooper said the analysis found no evidence of cost-shifting.

The analysis found that hospitals with more technology have higher prices, as do bigger hospitals. Hospitals with a higher share of Medicare patients have lower prices, Cooper said. There wasn’t a strong relationship between cost and quality, although hospitals ranked by U.S. News & World Report – what Cooper described as “perceived quality” – had prices that were 13.3 percent higher than others.

Not everyone agrees with the idea of focusing on market concentration in addressing prices.

Vin Petrini, a spokesman for the Yale New Haven Health System, said any conversation about pricing in Connecticut has to involve discussion of state taxes on hospitals – which have grown by hundreds of millions of dollars in recent years – and cuts to Medicaid reimbursement. He said both are major factors in hospital pricing, as is the fact that, unlike other states, Connecticut has no dedicated safety-net hospitals.

He noted that two-thirds of Yale-New Haven Hospital’s patients are covered by Medicare or Medicaid, and said being paid below cost for two-thirds of patients inevitably leads to a shift of cost to those with private insurance.

While critics have warned about the prospect of the Yale New Haven and Hartford HealthCare systems dominating the state, Petrini said Connecticut has multiple major health systems, including national hospital chains Ascension – which includes St. Vincent’s Medical Center in Bridgeport – and Trinity Health, the parent company of St. Francis Hospital and Medical Center in Hartford and Johnson Memorial Medical Center in Stafford Springs. Trinity is also in the process of acquiring St. Mary’s Hospital in Waterbury. Memorial Sloan Kettering Cancer Center, the Mayo Clinic and the Hospital for Special Surgery also have affiliations with Connecticut hospitals.

“When you put all those things together in one small state, that’s a lot of competition,” Petrini said.

What can policymakers do?

So what would Cooper recommend policymakers do to address costs?

Cooper named a few things that won’t work: Simply making all hospitals’ prices lower. Blocking every proposed hospital merger – or just allowing insurance companies to merge, since insurers with fewer competitors tend to negotiate lower payment rates for hospitals. (Having fewer, bigger insurers might lead to lower prices, Cooper said, but the question is whether those savings will be passed on to consumers.)

And Cooper said he’s not a fan of having regulators set prices, which he said is very difficult to do accurately.

Still, Cooper said there are some areas that are amenable to price regulation, including setting emergency room fees, since patients have no choice about where they go. And he said policymakers need to think about setting prices in situations with no geographic competition, where patients have no options.

So what could work? Cooper pointed to a few levers as key.

Strong antitrust enforcement is needed, he said, including when it comes to hospitals acquiring physician practices to scoop up referrals. He said certificate-of-need laws, which require state approval before hospitals can open certain facilities or acquire major medical equipment, block new providers from entering markets with no evidence of doing good.

And a big advance, Cooper said, would come from making hospital price data public, although not because he expects patients to use it.

“You guys posting the price of every hospital will make no difference immediately,” he said. “But you still need to do it. Eventually, some clever kid in San Francisco’s going to figure out an app to use that data to help me shop.”

He added that most Connecticut patients are already cared for by large hospital networks, and that most independent hospitals will probably be part of a larger system within a few years.

“We can’t preserve what we have, because what we have is the dodo,” Handelman said. “How are we going to, in the future, achieve all of our needs?”