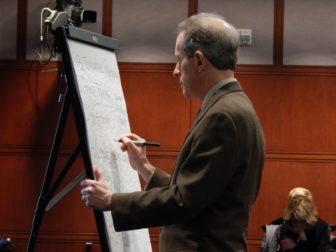 Consultant Michael Bailit takes notes as members of the health care cabinet talk about the study.

In the quest to control ever-growing health care costs, Massachusetts created a health policy commission that sets a cap for annual health care cost increases and reports which providers exceed it.

Rhode Island’s insurance department has pushed insurers to increase funding for primary care and sought to limit hospital payment rates, while the state’s governor initiated an effort to develop a health care spending cap for the state.

Maryland has for years set rates for hospitals, and now gives them a set budget to care for their patients – rather than paying separately for each admission – in the hope it will lead hospitals to focus more on improving patients’ health and preventing unnecessary hospitalizations.

Could Connecticut embrace a similar model to try to contain health care costs that are widely seen as unsustainable?

Consultants hired by the state will be studying that and other questions in the coming months, with an eye toward recommending specific options to legislators by Dec. 1.

Their mission was set out in a massive health care law passed last year, inspired by legislative leaders’ concerns about the changing health care market.

The state Senate’s top Democrat and Republican, who spearheaded the legislation, initially proposed creating a state agency to monitor and report on health care costs and market trends, modeled after Massachusetts’ commission. But the final version of the bill instead called for research into cost containment methods to be handled by the state’s existing health care cabinet, which is led by Lt. Gov. Nancy Wyman and includes many state agency leaders, representatives of provider groups and others.

The law calls for the cabinet to study cost containment models in other states – including Massachusetts, Maryland, Oregon, Rhode Island, Washington and Vermont – to identify ways Connecticut could monitor and control health care costs, enhance market competition, promote the use of high-quality providers with low prices, improve health care cost and quality transparency, and improve the quality of care and health outcomes.

The cabinet must recommend to legislators:

The study will be conducted by Massachusetts-based Bailit Health Purchasing, which will be paid up to $363,445, according to its contract. Of that, $190,000 will come from four foundations – the Connecticut Health Foundation, the Universal Health Care Foundation of Connecticut, The Donaghue Foundation, and the Foundation for Community Health – while the state will be responsible for the rest. The consultants told the cabinet Tuesday that they expect to present options in June and have final recommendations in November.

The study comes at a time when policymakers have raised concerns about consolidation in health care – particularly among hospitals joining larger systems and physicians joining hospital groups. Health care providers, meanwhile, have raised concerns about proposed mergers between major insurers, including Anthem – the parent of Connecticut’s largest insurer – and Bloomfield-based Cigna.

It also comes amid a growing focus on changing the way care is paid for and delivered. The existing method, in which providers are generally paid a set fee for each visit or procedure, is widely seen as encouraging more care, regardless of its quality. There are now multiple state and national efforts to tie payments to care quality and cost efficiency, but they are still evolving. One is a state-based reform effort – referred to as the state innovation model – that, among other things, aims to coordinate the standards used by government and private insurers, viewed as a way to foster change in how care is delivered and to avoid making doctors focus on separate measures depending on a patient’s insurer.

During a meeting Tuesday, cabinet members stressed the importance of taming health care costs. Anne Foley, an official in Gov. Dannel P. Malloy’s budget office, said the state’s health care system is not sustainable, and that strategies need to be put in place to control costs..

Bob Tessier, executive director of the Connecticut Coalition of Taft-Hartley Health Funds, agreed, pointing to the burden on the state budget, insurance companies, employers and working people, who increasingly pay a larger share of their medical bills.

While many health care cost efforts center on “bending the cost curve” – that is, reducing the rate of cost increases – Tessier said the focus must be on actually reducing costs, not just how fast they grow.

And without finding ways to ensure patients are healthier and take better care of themselves, he added, health care costs will continue to rise.

After the consultants described models used by other states, Wyman asked, “If you were starting a new program, which state would you follow?”

Michael Bailit, the firm’s president, said it was impossible to answer, because what works in one state might not in another. That means they must identify something that can be customized to Connecticut’s unique dynamics, he said.

But, Bailit said, all the states they described Tuesday – Massachusetts, Rhode Island, Vermont, Oregon, Washington and Maryland – focus on improving the effectiveness and efficiency of care delivery; thinking more holistically about people’s health rather than just about medical care; trying to create new connections within the system, and, to differing degrees, addressing failures in the competitive market.

“That’s a formula for success,” he said. “How you get there will differ, but I would say whatever you do you probably want to touch on at least those four areas.”