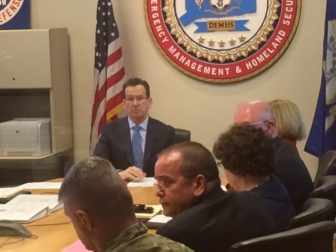 Gov. Dannel P. Malloy at a briefing on Zika. Dr. Raul Pino is second from left.

Gov. Dannel P. Malloy named Dr. Raul Pino to lead the state Department of Public Health on Thursday, then immediately featured him at a briefing on the mosquito-borne Zika virus.

Pino and other state officials said Thursday that chances are extremely remote that the virus would be transmitted by any of the 49 species of mosquito found in Connecticut, but his department is getting calls from pregnant women who recently returned from warm-weather areas with a Zika outbreak, which include Puerto Rico.

The virus is being investigated as a possible cause of microcephaly, a rare birth defect that leaves infants with unusually small heads. Connecticut recorded 24 cases from 2006 to 2014, or about three a year.

“There are many reasons” for microcephaly, Pino said.

Based on symptoms and travel history, the state has authorized 30 women to be tested for Zika by the U.S. Centers for Disease Control and Prevention. Of the eight women already tested, no Zika cases were found. 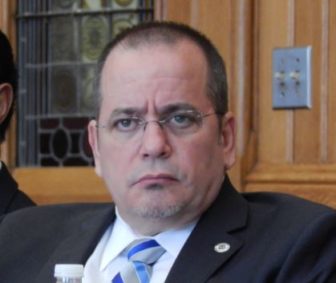 Theodore G. Andreadis, an insect expert who also is director of the Connecticut Agricultural Experiment Station, said the mosquito that carries Zika cannot survive in Connecticut, but another species found here in limited areas could conceivably carry the disease.

“I do not anticipate that we’ll see it,” he said.

Pino, now the acting head of the department, faces confirmation by the General Assembly.

Pino previously served as deputy commissioner of the agency and, before that, director of Hartford’s Department of Health and Human Services. He has also worked as an epidemiologist for the state health department’s sexually transmitted disease unit, and at the Institute for Community Research, Hispanic Health Council and Hartford Hospital.

“Dr. Pino is very well respected in the health and human services fields and is known to many within Connecticut’s public health community,” Malloy said in a statement announcing Pino’s nomination.  “He has the experience to guide our state and help ensure improved health and safety.”

According to the governor’s office, Pino, a native of Cuba and veteran of the Cuban Army, came to Connecticut as a political refugee.

His predecessor, Dr. Jewel Mullen, left the agency for a post with the U.S. Department of Health and Human Services.