Tuesday’s debate over whether to grant raises to non-teaching professionals at the University of Connecticut reverberated Wednesday throughout the state Capitol.

Republican legislators said the prospect of guaranteed annual raises of up to 4.5 percent for members of the UConn Professional Employees Association weakens any chance of getting the state’s 32 other bargaining units to accept a wage freeze, cut, or reduced benefits to mitigate ballooning state budget deficits. 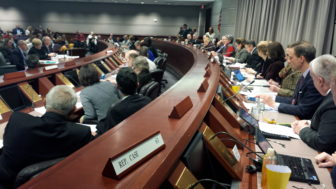 UConn officials field questions from the Appropriations Committee on Tuesday.

Gov. Dannel P. Malloy and his fellow Democrats in legislative leadership took a more reserved tone Wednesday, declining to say whether the legislature should reject a deal, negotiated by UConn, that split the Appropriations Committee one day earlier.

“Connecticut cannot afford this,” House Minority Leader Themis Klarides, R-Derby, said. “To guarantee pay increases, I think, is preposterous at this time. If we do that, that will tell you who is running the show.

Meanwhile, leaders of some of the state’s largest bargaining units said Tuesday’s Appropriations Committee meeting put forward a crucial alternative in a Capitol debate that has fixated unfairly on spending cuts as the only solution to Connecticut’s fiscal challenges.

But Larry Dorman, spokesman for Council 4 of the American Federation of State, County and Municipal Employees, said “We can’t continually talk about cutting middle-class workers’ wages and benefits.”

Council 4, one of the largest bargaining units in state government, isn’t affiliated with the UConn union. But Dorman said Tuesday’s committee debate may not have named — but alluded to — “the elephant in the room” that all bargaining units are concerned about. “We’ve got to have a broader discussion about taxes and revenue. We should be talking about asking Connecticut’s wealthiest and most successful to pay a bit more.”

At issue is a five-year tentative contract that would grant about 1,870 non-teaching professionals at UConn general wage hikes of 2 percent next fiscal year, and 1 percent each year after that.

It also includes a pool of funds to provide annual merit pay hikes equal, on average to another 1 percent.

And in each the last four years of the deal, workers’ pay would rise 2.5 percent to reflect an increase in the work week from 35 to 40 hours.

All totaled, average pay hikes are around 3 percent in the first year, and 4.5 percent in each of the next four. 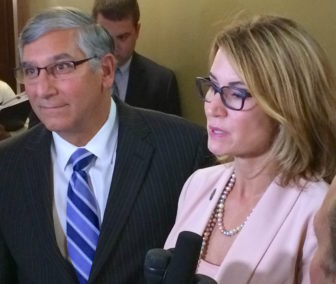 “I am so disappointed in my Democratic colleagues,” said Rep. Melissa Ziobron of East Haddam, ranking GOP representatives on the Appropriations Committee. “We had an opportunity Tuesday to say, ‘Here is our line in the sand.’”

At Tuesday’s meeting, the Appropriations Committee sent a mixed message to the legislature about this contract.

House members on the Democrat-controlled panel voted 24-19 — largely along party lines — to endorse the contract.

Senators on the Appropriations Committee defeated a motion to endorse — thereby sending an “unfavorable” report on the contract to the full Senate — in a 6-6 deadlock vote.

Under a controversial rule, the legislature can approve union contracts without voting on them. Such agreements automatically are ratified within 30 days of being filed with the General Assembly — unless either the House or Senate formally votes to accept or reject them.

This hasn’t happened since a contract with Department of Correction officers was rejected in 1997.

The Malloy administration is in negotiations with about 30 bargaining units, whose existing contracts also expire in June. The governor has said his administration is asking everyone to recognize a new Connecticut economy that isn’t as strong as it was before the last recession.

“Our expectations for these negotiations should be based on what we can afford, not what we previously spent,” Malloy said in his annual State of the State Address on Feb. 3. 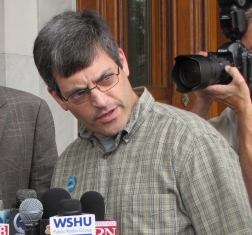 But unless the House or Senate rejects the UConn deal before the 30-day deadline expires on March 9, Republican legislators said Wednesday, the chances of getting any other union to sacrifice get very slim.

“That is setting a clear benchmark for future negotiations,” Ziobron said.

Republican lawmakers have been pushing hard for the governor not only to restrict overtime and negotiate lean wage contracts, but also to reopen an expensive benefits deal with the State Employees Bargaining Agents Coalition and seek givebacks in this area.

“I think (the UConn contract) has a direct effect upon these objectives, … and on the governor’s ability to be a tougher negotiator for the state,” said Senate Minority Leader Len Fasano, R-North Haven.”

For much of the past decade, Republican minorities in the House and Senate have argued to end a longstanding legislative practice that allows the General Assembly to approve contracts and arbitration awards for unionized workers without voting on them.

Malloy called for a similar rule change during his first year in office in 2011, and again this past February.

When asked by The Mirror on Tuesday evening what the full House and Senate should do about the UConn contract, the governor said, “I’d like to see both chambers vote on it. I’ve been a supporter of the legislature taking up contracts, so I would hope they would take it up.”

But does the Democratic governor believe these contracts should be accepted or rejected?

“I’ll reflect on it and give you an answer at a later date,” Malloy said.

Senate President Pro Tem Martin M. Looney, D-New Haven, said only that majority Democrats in his chamber “have not caucused it yet. We will be talking to our members.”

House Speaker J. Brendan Sharkey, D-Hamden, was critical of the UConn contract, but stopped short of saying whether he would call a vote on the deal, or whether it should be accepted or rejected.

“Everyone understands the overall budget challenges we face, and I heard from legislators, both on the committee and not, who expressed understandable concerns, which I share, over the price tag of this contract,” Sharkey wrote in a statement. 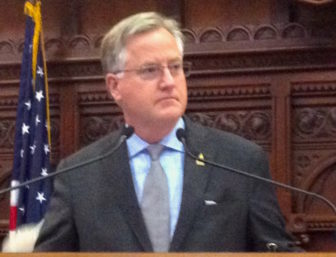 “Through no fault of UCPEA, it is apparent that UConn negotiated this without consideration of the economic reality of the state, and their CFO couldn’t say how they are going to pay for it,” the speaker added. “The truth is it has to either come from taxpayers, more tuition hikes, or layoffs, and that concerns me greatly.”

House Democrats have a closed-door caucus on Thursday to discuss any issue of interest among members, caucus spokesman Gabe Rosenberg said.

Fasano said, “I applaud the governor for the fact he is asking for a vote,” and said that those reading between the lines can see Malloy is uncomfortable with the deal’s cumulative, five-year price-tag of almost $94 million.

But Klarides said if Malloy wants to develop bipartisan support for a lean budget that avoids tax hikes, he needs to speak up.

“This is the man who came out three weeks ago and said we have to be fiscally prudent,” she said. “And now he doesn’t know how he feels?”

Rep. Cathy Abercrombie, a Meriden Democrat and veteran member of the Appropriations Committee who voted to endorse the UConn deal on Tuesday, said, “I was really on the fence.” But she added that it’s important to respect an agreement that was bargained in good faith by the union and the state.

Abercrombie also said Connecticut cannot solve the major budget deficits it faces simply by cutting programs for the poor and disabled, or by reducing pay and benefits for its workers.

The legislature’s nonpartisan Office of Fiscal Analysis is projecting a deficit topping $500 million in 2016-17, and shortfalls in excess of $1.7 billion and $1.8 billion in 2017-18 and 2018-19, respectively. The latter two deficits both represent about 9 percent of annual operating expenses.

“I’ve had to watch us make major cuts to (programs for) needy families for five years,” Avercrombie said. “We need to talk about the way we do our budget in a much broader way.”

Abercrombie never mentioned tax increases — a topic both parties have shunned at the Capitol this year with all House and Senate seats up for election.

But AFT Connecticut, one of the state’s largest teacher’s unions and a parent affiliate of the UConn bargaining unit, took out a newspaper ad this week urging state officials to make tax increases part of the budget debate.

“And in the spirit of fairness she (Walker) invoked, we hope the rest of our elected leaders will ask the top one percent to step up and do their part,” Hochadeal said. “CEOs and hedge fund managers should be concerned about our quality of life too, and it’s long past time they started to pay their fair share.”

“Yesterday’s vote demonstrated that not all lawmakers are ready to sign on to a proposed state budget that threatens to undermine Connecticut’s quality of life,” added UConn nurse Kathleen Sanner, president of the Professional Employees Association at the university. “By supporting a fair agreement that empowers higher education professionals to provide their students with vital support services, they chose to stand with working and middle class families.”