Auto retailers, makers call on Tesla to apply for franchise 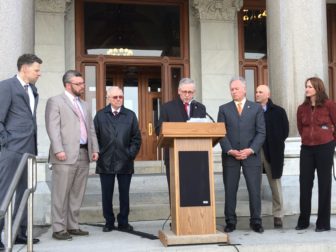 The Connecticut Automotive Retailers Association (CARA) is calling on Tesla to apply for a franchise license in the state rather than trying to push for “special treatment” in the form of a legislative workaround.

Representatives from the Alliance of Auto Manufacturers and General Motors joined four CARA leaders for a press conference in Hartford Tuesday morning. They said the state’s auto franchise system works and should not be circumvented.

“Noticeably missing but nevertheless welcome in this lineup of dealers and manufacturers is Tesla,” CARA President James Fleming said. “We would welcome them to join us in the franchise system today, as we have asked them over the past couple of years when they’ve come in to visit the state of Connecticut.”

Auto retailers and manufacturers were prompted to hold the press conference by a bill Senate Majority Leader Bob Duff, D-Norwalk, introduced that would allow electric car manufacturers to sell their vehicles directly to Connecticut consumers.

Legislators first considered the bill last year, when it passed the House 116-32 late in the session – too late for the Senate to bring it up for consideration.

Fleming’s organization represents 270 new-car dealers and 14,000 employees in Connecticut. Representatives of the organizations at the press conference called for “equity” in the auto market and said the bill would jeopardize an effective system.

“What we want to make sure we have is one set of regulations for everybody who’s going to compete in this marketplace,” said Landon Fulmer, vice president of state affairs for the Alliance of Auto Manufacturers. “We don’t need carve-outs, we don’t need loopholes. We need to make sure everybody plays by the same rules.”

The bill’s legislative supporters have said they hope the final language can strike a compromise between electric car companies and existing auto franchises in the state.

Duff said he reintroduced last year’s bill word-for-word because he believed it would have the most support from both auto retailers and manufacturers as well as electric car manufacturers without a physical presence in Connecticut like Tesla.

He said last year’s negotiations that resulted in the three-store limit were supposed to be a compromise. But this year, the auto retailers and manufacturers have not budged.

“I don’t think this group would settle for anything short of defeat of the bill,” Duff said. “If there’s a compromise, I’m all ears.”