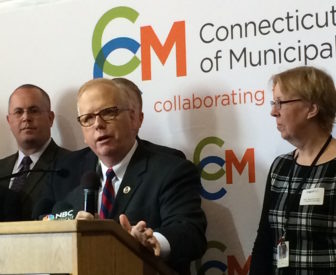 Danbury Mayor Mark Boughton, president of the Connecticut Conference of Municipalities, at podium, is flanked by Seymour First Selectman Kurt Miller and Sprague First Selectman Cathy Osten, who also is a state senator.

In light of surging state budget deficits, municipal leaders were skeptical Tuesday that their communities would receive the hundreds of millions of dollars in state sales tax receipts owed them over the next three years.

The Connecticut Conference of Municipalities also used their annual lobbying day at the Capitol to urge legislators to spare them from new mandates and to postpone and reform a new municipal spending cap.

“Get rid of that (sales tax) money, get rid of the cap, and just leave us alone,” said Ridgefield First Selectman Rudy Marconi, a Democrat.

“We’re already sending a message to every single department — including education — in the city,” said Torrington Mayor Elinor Carbone, a Republican. “We can’t continue to rely on state aid.”

Municipal leaders clamoring for more state assistance is nothing new to the Capitol.

But this year’s dynamic has taken a different tone.

Legislators, who are facing huge projected state budget deficits, say local leaders have short memories. Municipal aid has grown modestly over the past five years while many other state programs have faced cuts.

“Even in the depths of the largest recession in a generation, Democrats in the General Assembly have maintained and increased aid to cities and towns,” Senate Democratic Caucus spokesman Adam Joseph said afterward. “It is a priority for Senate Democratic leadership to preserve this historic (revenue-sharing) investment in municipalities.”

And while state officials took credit right away for an initiative they hailed as “historic” and “transformative,” local leaders noted that communities could wait almost 24 months — until June of 2016 — to see this money.

Between now and then, the legislature and Malloy must solve:

Further complicating matters, the legislature was supposed to start saving early to ensure the revenue-sharing plan would not fail. Specifically, the budget called for $105 million — nearly half of the $220 million owed  to communities in 2016-17 — to be placed in reserve now. Legislators and Malloy already have reduced that savings requirement this year to $30 million.

“It’s unlikely the state will be able to sustain that” in the face of those deficits, longtime Coventry Town Manager John Elsesser said.

Coventry officials are assuming “several fudge factors” when projecting state aid, Elsesser said. “I would not be surprised if the Town Council takes a very cautious approach.”

The sales tax initiative also came with a new municipal spending cap that mayors and first selectman are asking legislators to suspend until 2020.

That cap would penalize communities whose operating expenditures grow by more than 2.5 percent per year by reducing their share of sales tax receipts.

Danbury Mayor Mark Boughton, the president of CCM and a 2018 Republican gubernatorial contender, said the cap system is flawed and could have some unintended, negative consequences.

Certain areas of spending are exempt from the cap, including debt service, special education, and salary and benefit costs needed to comply with binding arbitration awards.

Raises and other costs tied to a mutually endorsed settlement would be subject to capping rules, but those ordered by an arbitrator would not, he said, adding there is no incentive for unions to attempt to reach a settlement.

“You’re never going to sit at the table and get an agreement,” he added.