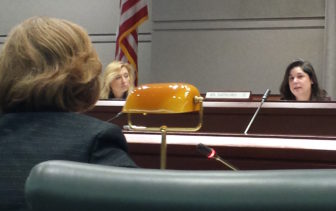 As turbulence increased around the state’s plan to start grading teachers based partly on student test scores, Connecticut Education Commissioner Dianna Wentzell took a new approach in an effort to kill legislation that would block linking the two.

“An outright ban is not only ill advised, it does not reflect what we are hearing directly from teachers,” Wentzell told members of the legislature’s Education Committee Monday. “They would like to have that option.”

Her evidence was a new survey that her agency asked certain school superintendents to distribute to teachers. Fifty-six percent of those surveyed responded that they thought evaluating them based in part on the state’s standardized tests should remain an option. Twenty percent had no opinion, and only 18 percent were opposed.

However, news quickly spread around the state Capitol complex that anyone was able to take the online survey multiple times once they had access to the link. The Connecticut Mirror was given the link and was able to submit the survey with blank responses multiple times and neutral responses once.

The survey was deactivated around 4 p.m. Monday, shortly after the issue was brought to the attention of the State Department of Education.

“The survey was developed to elevate and highlight teacher and principal voices and not to undermine it, but we are definitely looking into the concerns that have been raised,” Kelly Donnelly, the education commissioner’s chief of staff, said during an interview. 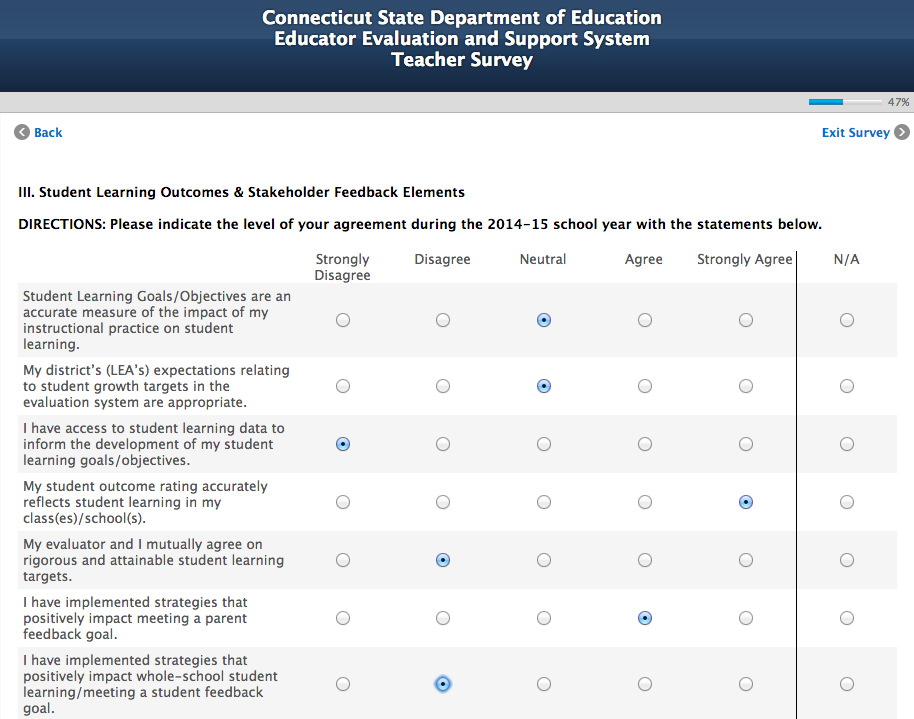 The State Department of Education’s online survey intended for teachers.

Presented with the results of the survey, some legislators were skeptical.

“Given that you are relying so heavily on it, it would be useful to have it in front of us,” said Sen. Gayle Slossberg, D-Milford, the Senate chair of the legislature’s Education Committee told Wentzell. “The teachers I have spoken with have had negative responses.”

The results of the education department’s survey contradict what the state’s teachers unions have been saying for months: that their surveys and conversations with members show overwhelmingly opposition to linking student test scores to evaluations.

“It is universal that these tests should not be included in a teacher’s evaluation,” David Cicarella, the president of the New Haven Federation of Teachers, said during an interview while he waited to testify on the bill. “They may be excellent tests to provide us student achievement results, but they are just not meant for evaluating teachers. They are being misused.”

Under current rules, schools will be required to start factoring test scores into teacher evaluations starting with the next school year.

The role of student assessments in educator evaluations has been a hot-button issue, particularly since the federal education law was changed this winter. Previously, state officials were required to put in place a teacher evaluation system based on student test scores if they wanted to receive a waiver from the requirements of the federal No Child Left Behind Act. Now, the federal government is prohibited from requiring that evaluations be linked to tests.

The state’s teacher evaluation system was one of the centerpieces of Gov. Dannel P. Malloy’s 2012 education reforms. Earlier this month the governor, a Democrat, said his administration would be staying the course with several of those reforms, which teachers’ unions detest.

“I think that if children are tested, then we should use that data in all appropriate ways,” Malloy said. Asked if it were appropriate to include test results in teacher evaluations, he responded, “That’s what everyone has agreed to.”

While a coalition of statewide organizations that represent businesses, superintendents, principals, school boards and charter schools are backing the use of exams in evaluations, several legislators expressed serious reservations Monday.

“My concern here is that we are holding our teachers responsible for a lot of things that are out of their control,” said Slossberg.

Several legislators recounted stories about how either they or their child were poor test takers. Others felt factoring in student performance would make it even more difficult to recruit and retain teachers to urban districts, where the majority of students test poorly and struggle with issues related to poverty. 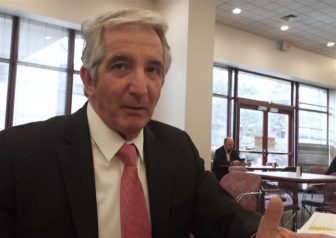 David Cicarella, president of the New Haven Federation of Teachers

“If we are tying our teachers’ performance to how our students are doing on this test, I think it’s horrendously unfair to do that because my son’s teachers did a tremendous job preparing him for college, and for beyond, and he’s not able to demonstrate that on a standardized test,” said Sen. Danté Bartolomeo, D-Merdien. “If you would have evaluated his teachers on the SBAC, you would have said he’s doing a terrible job.”

Education officials counter that what will count in a teacher’s evaluation is not how low students score, but how much they improve.

The current state-mandated teacher evaluation system requires that at least one-quarter of a teacher’s rating be linked to the statewide standardized exam. The remaining portion of the grade is tied to classroom observations (40 percent), anonymous parent or peer surveys (10 percent), carrying out teaching objectives or another standardized test (22.5 percent), and schoolwide test scores or student surveys (5 percent).

Other legislators say using any student outcomes is not appropriate in teacher evaluations as long as major disparities exist for urban districts, including having larger class sizes, less experienced teachers and aged text books.

“To evaluate a teacher based on the results of those test and those circumstances seems to be very difficult to reconcile,” Rep. Susan M. Johnson, D-Willimantic, said during the public hearing to a supporter of linking test scores to evaluations. “What you are saying might actually work for the communities that have access to adequate resources. But there are a number of things that are really, really deficient in our schools.”

The legislature’s Black and Puerto Rican Caucus supports linking test scores to evaluations because he says the research shows it will work at improving student outcomes.

“We are seriously concerned that this would be delayed or not allowed to move forward,” testified Rep. Bruce Morris, D-Norwalk, the leader of the caucus. “We are on the cusp of implementing the new system we all worked so hard to develop, thus it’s necessary we see this through, learn what we can from its results, and make certain our teacher evaluation system can work for both our educators and our kids.”

Data released show that last school year 546 teachers (1 percent of the state’s nearly 50,000 teachers) were evaluated as either “below standard” or “developing,” the two lowest ratings. Nearly identical results occurred in the 2013-14 school year. (See how teachers in your school district fared over the last two school years below). The vast majority received ratings of “proficient” or “exemplary.”

Rep. Andy Fleischmann, D-West Hartford, worries whether disparities between districts would make teachers hesitant to work in one where evaluations are deemed tougher.

“If we can’t develop a way to have some comparability between what’s happening from one district to another, I think we are being unfair to our educators and our districts,” he said.

The Education Committee’s deadline to approve the bill on test linkage is March 21. Meanwhile, the state panel that oversees teacher evaluations is set to meet this week.