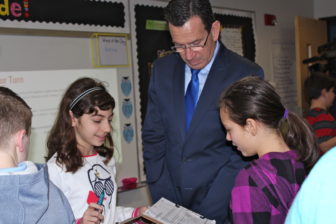 Gov. Malloy works with students on a lesson in a fifth grade class at an elementary school in Cromwell.

Gov. Dannel P. Malloy Thursday dismissed calls from the state’s largest teachers union to stop testing students with the controversial Smarter Balanced Assessment and stood by use of the test results in evaluating teachers.

“We are not getting rid of the Smarter Balanced test,” the Democratic governor told reporters. The computer-based test is being used for the third year.

The Malloy administration did, however, agree to scale back for the second time in a year the number of Smarter Balanced exams public school students must take.

Last spring the state dropped the exam for high school juniors and replaced it with the SAT college-entrance exam. Thursday, at Woodside Intermediate School in Cromwell, the governor announced that elementary and middle school students will no longer have to submit long-form essays – one of the two English assessments that students had to take last year. Students also will still have to take two assessments in math and one in science.

The eliminated tests will cut the amount of time students spend taking the assessments from about eight hours to about six and a half.

“We don’t want to burden people with too much testing, but we certainly want to make sure that we are mastering the subject area. That’s what we have to do,” Malloy said. He said the two separate English exams were duplicative.

In response to a question about whether the state should change use of the tests to grade teachers, as current state evaluation guidelines require, Malloy said, “I think that if children are tested, then we should use that data in all appropriate ways.”

Asked if it was appropriate to include test results in teacher evaluations, Malloy responded, “That’s what everyone has agreed to.“

The state’s teacher evaluation system – where student performance on statewide standardized tests accounts for nearly one-quarter of a teacher’s rating – was one of the centerpieces of Gov. Dannel P. Malloy’s 2012 education reforms.

Asked several times over the last several months whether student test scores should no longer be linked to evaluations, the administration has been noncommittal.

The Connecticut Education Association – the state’s largest teachers union – has made a strong push to stop using the Smarter Balanced Assessment and stop requiring the results be used in teacher evaluations.

A recent survey of 699 teachers administered by the State Department of Education found that nearly half felt the tests were too long and two-thirds said the time the computerized testing took was hindering their ability to use their schools’ computer labs for instruction.

“For two months, all computer labs were off limits every morning and many afternoons. That is stupid,” one teacher responded.

A survey of 1,687 students by the State Department of Education found concerns that the tests were not aligned to what the students had learned in class and they struggled taking the exam because of technical problems.

“I think it’s silly and doesn’t really give me a chance to show what I know,” one student responded.

The administration also defended their decision to penalize districts where too many students miss the exam. Federal law requires the state to submit a plan to increase participation rates on the tests in districts that dropped below 95 percent for any subgroup of students. 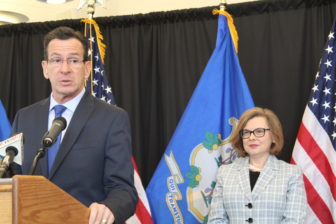 The state Department of Education in December announced those penalties would include withholding funding for districts that fall below the threshold for two consecutive years.

On Thursday, Dianna Wentzell, the state’s education commissioner, said that was her only option.

“We recognize that universal participation on state assessments is not only the law, it’s also a civil rights issue. We owe all of our children and their families to make sure that we are checking on the promise we make to them,” she told reporters.

She said the U.S. Department of Education insisted on the penalties. “They were expecting sanctions this year. I wanted a warning year,” she said.

The federal agency was unable to confirm Thursday what their expectations are for how states must respond to low participation rates, and whether  funding must be withheld.

The CEA pounced on the governor’s announcement about reducing the testing.

“He’s trying to just nibble around the edges. It’s a good PR move but the practical side of it is, it doesn’t change much,” said Mark Waxenberg, the executive director of CEA. “He’s staying the Captain of the Titantic. This is a sinking ship.”

The governor’s relationship with the state’s teachers’ unions – who endorsed him during his reelection campaign – fractured in recent months after it became apparent that he would not be changing course on his education reforms. A new federal education law has given states wide latitude to decide how teachers are graded and students are tested.

“It’s frustrating. You endorse someone, and then you try to raise a concern and the door’s closed,” said Waxenberg. “I have his number. I have called him. He has not answered. He has not called back.”

Tension was apparent during Malloy’s press conference when he was asked what the CEA and the American Federation of Teachers would think of scaling back the Smarter Balanced Assessments.

“I’ve given up trying to figure that one out. I imagine they’ll be happy,” he said.

“It’s disappointing that the governor says he has ‘given up’ trying to figure out what educators think about over-testing in our public schools. If he were to directly engage and collaborate with classroom teachers there would be no need to simply guess how we feel about a such a critical issue. Teachers don’t ‘give up’ on our students,” said Jan Hochadel, the president of AFT-Connecticut.