What does the federal education bill mean for CT schools? 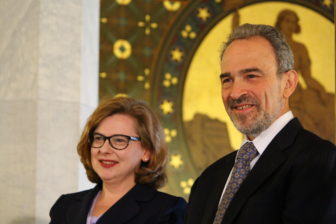 As Congress nears the finish line on a new education bill that retreats from the rigid requirements of the No Child Left Behind law, state education leaders say they left that law behind years ago.

In 2012, facing a deadline to have 100 percent of students proficient in reading and math, state lawmakers changed how teachers, students and schools are graded — and what those scores would be used for — in exchange for relief from the No-Child-Left-Behind requirements.

Top education leaders said Wednesday they aren’t ready to retreat from most of the changes, which persuaded the U.S. Department of Education to grant Connecticut a waiver under the federal law.

The new bill also requires the state to craft plans to improve the lowest-performing 5 percent of schools. The state created its own system in 2012 — dubbed Alliance Districts and Commissioner Network schools — to direct additional funding and support to poor-performing schools.

Allan Taylor, the chairman of the State Board of Education, and Dianna Wentzell, the state’s education commissioner, said during interviews Wednesday they don’t foresee the state’s changing those approaches.

“Some of our schools and districts need more support, and that’s what the Alliance District and Commissioners Network programs were designed to do,” said Wentzell. “The changes are very much aligned with where we already are on that.”

“We’re already doing that,” said Taylor of the requirement to set up a system to intervene in the worst-off schools. “I can’t believe anybody in the department or the legislature is going to look at the new bill and say, ‘Oh Okay, we can stop doing that now.’ I don’t believe we will change that role of the State Department of Education and I don’t think we should.”

The bill approved by Congress also gives the state wide lattitude on whether to continue the most controversial policies it was required to adopt to win a waiver.

The bill leaves up to individual states whether to continue with the controversial Common Core State Standards by requiring students to take tests aligned with them. States also get to determine whether schools receive a lower rating if too many students don’t take the annual tests, and whether to continue linking student test scores to teacher evaluations.

Asked whether changes are planned or needed in these three areas, Gov. Dannel P. Malloy was noncommittal Wednesday afternoon.

“You’ve asked such an exhaustive question, I will have to ponder that before I answer,” the Democratic governor said outside his office at the state Capitol.

His education commissioner said earlier in the day that any changes to linking teacher evaluations to test scores would be discussed and decided by the state panel that oversees and sets teacher evaluation policy.

That panel — the Performance Evaluation Advisory Council (PEAC) — meets next Wednesday, and Wentzell and Taylor said they don’t want to preempt what that panel of education stakeholders agrees is best for Connecticut students.

“Our PEAC process would be where we would make those decisions,” said Wentzell. “It really puts the right people in the room to think about what we should do next and how we continue to refine our implementation.”

“I don’t foresee that happening,” he said. “I happen to think the Common Core is far better than anything we had done before.”

On punishing districts where too many students miss the annual test, Taylor said that’s largely not an issue in Connecticut’s districts. With only 4 percent of students not taking the required test last school year, the so-called “opt out movement” did not have much affect in the state.