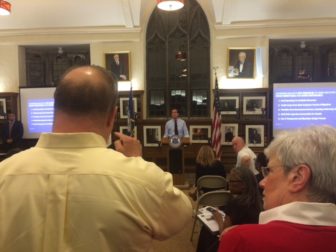 Gov. Dannel P. Malloy jousted Wednesday night with state employees angry over his plans to shrink the state workforce and citizens frightened of what a smaller government will mean for disabled relatives dependent on state services.

The governor offered little solace to either at his fourth town hall forum of the year, telling them that two major tax increases in six years have failed to produce revenue necessary to maintain state government.

Michael Zobray told Malloy that a plan to privatize the group home in Manchester where his 63-year-old intellectually disabled brother, Rick, has lived for three decades would mean the loss of state staff, devastating to someone who is non-verbal and cannot cope with change.

“We are going to be closing state facilities, I’m sure. We are going to be laying off state employees, I’m quite certain,” Malloy said. “We’re going to be changing how we do business in a number of ways, all of which is designed to make sure that we provide the best possible services that we can to your brother.”

Malloy promised either he or Lt. Gov. Nancy Wyman would visit Zobray’s brother’s home, but he made no commitments to end the move toward privatization of the group homes. Zobray reminded him he had opposed privatization as a candidate in 2009.

Malloy’s proposed budget calls for the state to essentially get out of the business of directly operating group homes. Joe Gannon, a union member who works at the Department of Development Services, said 10 homes are expected to go private this year and 30 the next.

The open forum at the University of Connecticut School of Law in Hartford’s West End, a neighborhood of political activists, was the first since Malloy called for the rejection of raises UConn negotiated with its non-teaching professional staff.

Members of the AFT-Connecticut affiliate that represents the employees greeted him with signs calling for respect for the collective bargaining process. They held the signs aloft during the hour-long session, but did not interrupt Malloy’s give and take with nearly a dozen questioners.

One tense exchange with a Department of Correction employee, who was clearly angry over the promise of layoffs five years after state employees agreed to concessions, turned humorous. He was one of two correction employees to confront the governor.

Malloy said there are no options.

“So, what do you do?” asked Malloy, who was fighting a cold. “If you were in my shoes, would you want me to raise taxes?”

“You want me to lay people off?”

“You want me to pull a rabbit out of my hat?”

The break in the mood was momentary.

Kathleen Flaherty, the executive director of the Connecticut Legal Rights Project, which represents the mentally ill through a contract with the state, told the governor her lawyers already were taking furlough days.

Malloy offered no assurances that her non-profit would escape further cuts, but she was pleased when he called her agency’s work a core function of government.

Shelagh McClure, the mother of a 25-year-old son with an intellectual disability, told Malloy she recently heard that the state would be ending funding for a day program that serves her son and others after they finish high school.

“To graduate from high school and have nothing for them would be horrible,” she said.

Malloy said he could not confirm that the program was ending.

The governor closed the evening with a warning that real cuts in the labor force are necessary and are imminent, not as a bargaining ploy or because employees are at fault for the state’s budget difficulties.

“The design of these things is not that I’m going to make everybody happy,” Malloy said of the forums. “There are wonderful state employees in the room. I have not said that state employees are responsible for the predicament we find ourselves in.”

In 2011, when he confronted a first-year deficit of more than $3.6 billion, Malloy negotiated a two-year pay freeze and changes in retirement benefits in return for a no layoff promise. Now, in the second year of his second term, his administration does not see any concessions that could take layoffs off the table.

Aside from the immediate financial challenge — the state faces at leas a $266 million shortfall in the current fiscal year after mid-year spending cuts, and a shortfall approaching $1 billion next year – Malloy said the state’s unfunded pension liability is a “shadow” over the state’s economic stability.

“Short-term, we’ve got to live within our means. Long-term, we have to build our economy,” Malloy said. “You fail to build your economy, ultimately, one by one, company by company, jobs leave. You have to find the right balance. I’m not in any way saying I should be the final and sole arbiter of the right way. But I’m telling you, if we don’t pay attention, we’re going to be in trouble.”

Malloy said labor made clear it was uninterested in reopening the contract on retirement benefits, which was extended from 2017 to 2022 under the 2011 concession deal, when he broached the idea in his budget address in February.

“I don’t think there’s anyone who didn’t understand that the day I gave the speech,” Malloy told reporters after the forum. “And I can tell that they did, because they said, ‘No way in hell are we going to reopen that agreement.’ ”

The governor apparently was referring to public statements by union leaders after the budget speech, not a formal rejection of a request for talks.

“I can tell you we haven’t been requested to attend any such meetings,” said Dan Livingston, the chief negotiator for a coalition of state employee bargaining agents. “We like to think the governor respects the sacrifices we already made in the agreement he negotiated in 2011.”

Livingston indicated labor probably would be open to talks with the governor, but their agenda might not be the governor’s.

“We’re not likely to turn down a request for a meeting from the governor,” he said. “We’re anxious to hear how layoff and service cuts will help middle and working-class people who are struggling in a rigged economy.”