Washington – Senate approval of a bill to fight the nation’s opioid epidemic is still likely to leave states like Connecticut on the front lines of the crisis — and to leave them short of all the help they need to prevent the destroyed lives that result from the abuse of pain killers and heroin.

But the strong bipartisan support for the Comprehensive Addiction and Recovery Act of 2015, known as CARA, is considered an important move to halt the growth in the United States of addiction to opioids – and the first step in what many hope is additional support from Washington.

Abuse of heroin and prescription opioids is rising in Connecticut as it has across the country. More than 47,000 overdose deaths occurred in the United States in 2014, according to the Centers for Disease Control and Prevention; and overdose deaths now outnumber deaths from car accidents. In Connecticut, 723 people died from drug overdoses of all kinds in 2015, most of those from heroin and other opioids.

CARA, approved on a 94-1 vote, would authorize the expansion of a number of grant programs states like Connecticut could tap to prevent and treat opioid addiction, and prosecute those who sell heroin and prescription drugs on the black market. 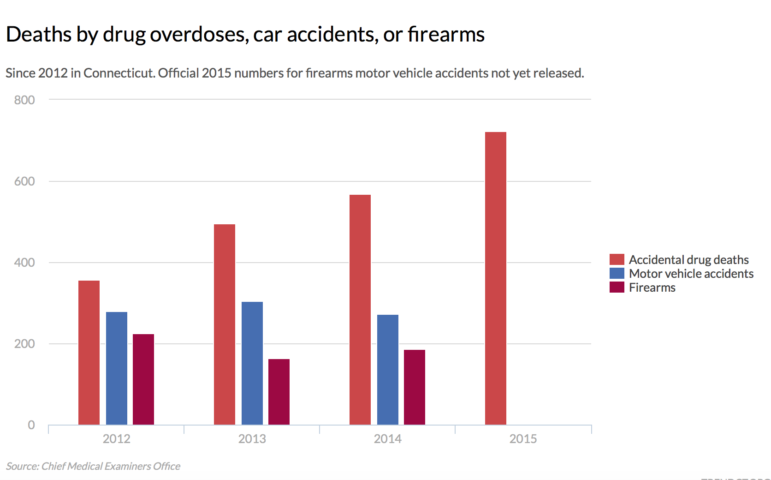 But it does not contain the money needed to expand the programs. Attempts to add $600 million in emergency funds to do so were defeated by Republicans, who said the Department of Health and Human Services should instead shift money from other accounts.

Devon Puglia, a spokesman for Gov. Dannel P. Malloy, said if additional money were made available to the states, Connecticut would apply.

“This is a national trend that we are working diligently to tackle not just in Connecticut, but across the entire northeast in partnership with our neighboring states,” Puglia said. “If there are funds available, we will no doubt apply for them because we need to prevent addiction as well as continue to provide as much support as possible for those who need it.”

Like many other politicians, especially those from New England, where the abuse of opioids is greater than in many other parts of the nation, Connecticut’s members of Congress have joined the efforts in Washington, D.C., to help states combat the problem.

On Thursday, Rep. Joe Courtney, D-2nd District, said the Senate bill would have a “meaningful impact on the growing prescription opioid and heroin abuse crisis,” and called on the U.S. House of Representatives to approve the legislation.

“I urge Speaker [Paul] Ryan to recognize that our country remains in the grip of a drug abuse epidemic, and that the states urgently need assistance from the federal government in order to properly address this public health emergency,” he said.

Courtney also said he hoped the House would consider a bill he introduced last month that would provide the additional $600 million dollars in emergency supplemental funding to combat opioid abuse.

CARA also includes provisions of a bill recently introduced in the House by Rep. Elizabeth Esty, D-5th District, that would boost educational efforts on the dangers of opioid use.

Sen. Chris Murphy, D-Conn., is promoting another bill, the TREAT Act, that would increase the treatment of addicts with buprenorphine, a  semi-synthetic that can produce opioid-like side effects like euphoria, but whose impact is weaker and is much safer than heroin.

“I voted to support CARA today because Congress needs to take a first step toward stopping the devastating tidal wave of addiction, overdoses, and deaths plaguing our nation right now,” Murphy said. “But Congress needs to do much more than simply pass a bill creating more unfunded programs.”

That provision met with resistance from doctors’ groups, who said it would interfere with the treatment of patients.

“The creation of additional prescribing barriers for primary care physicians would limit patient access when there is a legitimate need for pain relief,” said a letter sent this week from the American Academy of Family Physicians to Senate Majority Leader Mitch McConnell, R-Ky. 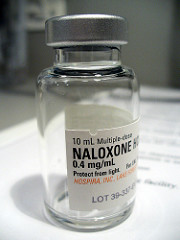 An opioid-overdose antidote called naloxone, also known by its trade name Narcan, has since 1971 brought heroin overdose victims back from the brink of death.

CARA hopes to broaden the use of naloxone by offering liability protections to state officials who distribute it.

In Connecticut, many, but not all, first responders carry naloxone. State police officers are equipped with the drug, but those in large municipal police forces, including officers in Hartford, New London and New Haven, are not. In those cities, firefighters and other emergency personnel carry Narcan.

The overdose antidote, which can be injected or administered by nasal spray, has also had steep price increases, even as more pharmaceuticals make naloxone and it’s available in generic form.

For example, Amphastar Pharmaceuticals, one of the companies that offers the naxolone frequently supplied to hospitals, said in its most recent quarterly earnings report that  sales of the drug more than doubled, from $3.7 million in the third quarter of  2014 to $10.5 million in the third quarter of 2015 “as a result of increased unit volumes at higher average prices.”

Laurence Grotheer, spokesman for the city of New Haven, said the budget for the Narcan used by the city’s 12 fire stations and two paramedic units “likely has doubled,” in the last year.

“It’s hard to budget for pharmaceuticals because of the volatility in that industry,” he said.

The state troopers’ Narcan is funded through an asset forfeiture account, and cost $33,312 so far this year, said Mike Lawlor, Connecticut under secretary for criminal justice policy and planning.

While not every first responder in the state carries Narcan, Lawlor said Malloy is pressing for approval of a bill, HB 5053, that would require every municipality to ensure that first responders in their town are equipped with the heroin antidote.