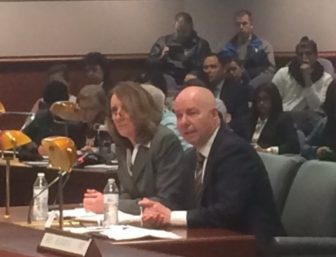 Republican legislators grilled Gov. Dannel P. Malloy’s top legal advisers for hours Monday during a public hearing on an administration proposal that sets the safety of domestic violence victims against the rights of gun owners.

The bill would require gun owners to surrender their firearms to police or a licensed firearms dealer within 24 hours of being served with a temporary restraining order. The weapons would be returned if a judge found no basis for a permanent order.

The introduction of the bill for the second consecutive year was viewed by some Republicans as an attempt by the Democratic majority to develop a wedge issue in a legislative election year. House Democratic leaders refused to call the bill for a vote last year in the face of a threatened filibuster.

“It’s certainly a political issue in that somebody who does not support this TRO bill would be accused of supporting gun-owner rights over a victim of domestic violence,” said Rep. Vincent J. Candelora, R-North Branford, a deputy GOP leader. “The issue is a lot more complicated than that. I think that is why, frankly, we’re seeing this bill in an election year. I’m sure the Democrat Party views this as a losing proposition for Republicans.”

Scott Wilson, the president and co-founder of a major gun owners’ group, the Connecticut Citizens Defense League, said he viewed the proposal as gun control disguised as an initiative to protect abused women.

“I think this is death by a thousand cuts, creeping incrementalism,” said Wilson, whose group opposed a law passed in response to the Newtown school shooting that banned some weapons and imposed universal background checks on buyers of firearms and ammunition.

Rep. William Tong, D-Stamford, the co-chair of the Judiciary Committee, said the bill was mischaracterized as a gun-control measure and election-year politics.

“I know that it’s an election year, but this legislation is nowhere near a stunt or a feel-good, election-year veneer,” Tong said. “Twenty other states have done it. This is real.”

Tong said the bill was modified since last year to clarify that weapons must be returned if a permanent restraining order is not granted. Also, he said, a law enforcement officer or anyone else who carries a gun as a condition of employment could obtain an expedited hearing.

Michael P. Lawlor, the governor’s criminal justice adviser, and Karen Buffkin, his general counsel, testified that the bill is modeled after laws in 20 other states and reflects research that shows the most dangerous time in a relationship marked by abuse is immediately after a temporary restraining order is served.

Women in abusive relationships are five times more likely to be killed if their abuser has access to a firearm, according to Buffkin. Connecticut averaged 14 intimate-partner homicides a year form 2000 to 2014, with guns used in 39 percent of those 188 homicides.

“This isn’t a gun control measure,” Tong said. “It’s not about the deprivation of peoples’ right to have firearms. To make it about that really misses the point. This is about tamping down the temperature in a very risky situation where there is a domestic violence dispute going on.”

Opponents complained that gun owners are being subjected to the loss of their weapons, even if temporarily, without due process. Temporary restraining orders are granted ex parte, meaning an uncontested proceeding in which only one party is heard.

An applicant – nearly always a woman – files an affidavit complaining of abuse and a temporary restraining order is issued if a judge concludes there is probable cause to suspect abuse. Within 14 days, a judge determines if there are grounds for a permanent restraining order after a contested hearing in which evidence can be presented.

In about half the cases, no permanent order is granted.

Connecticut law currently requires gun owners to surrender their firearms once a permanent restraining order is issued against them.

The NRA, a coalition of Connecticut sportsmen and the state’s largest gun owners group, the Connecticut Citizens Defense League, all offered testimony in opposition, calling the bill a violation of due-process rights.

“Innocent until proven guilty, that’s how I was brought up,” said Rep. Rob Sampson, R-Wolcott.

Lawlor noted the ex-parte process is hardly unique in American jurisprudence. Police obtain arrest warrants in ex-parte proceedings in which they assert a probable cause for arrest in sworn affidavits. In those cases, the stakes are a potential loss of liberty for months until trial, not two weeks without a firearm.

Republicans repeatedly challenged Lawlor and Buffkin on the need for seizing guns from men subjected to temporary restraining orders.

Lawlor offered the hypothetical of an estranged husband or boyfriend being permitted under current law to sit in a parked car outside a woman’s home with a gun, angry after being served with a restraining order. In 20 other states, that man either would have surrendered his weapons or faced arrest, Lawlor said.

“How often do they find people in possession of firearms parked outside the home with a TRO?” asked Rep. Arthur O’Neill, R-Southbury.

Lawlor described a man in Kansas who hunted a woman at her workplace with an AK-47 after being served, shooting her and co-workers.

“That wasn’t someone parked outside a house waiting for someone to come home,” O’Neill replied.

“It was precipitated by a restraining order, and the target was the girlfriend,” Lawlor said.

Sampson told Lawlor, a former co-chair of the Judiciary Committee before joining the Malloy administration, that nothing would stop a woman from lying on an affidavit to inconvenience an ex into surrendering a valuable firearms collection. And if a woman were truly fearful, he said, there were better options than a restraining order.

“If I’m scared that someone is going to hurt me, that I’m in imminent danger, I’m going to call a cop; I’m not going to call my lawyer,” Sampson said.

Rep. Doug Dubitsky, R-Chaplin, whose opposition to the gun control law passed in response to the Newtown school shooting helped him unseat a Democratic incumbent in 2014, said his opposition to the proposed legislation was motivated by a desire to protect women.

He said an abusive husband could fraudulently obtain a temporary restraining order against his victim, forcing her to surrender a firearm she might hold for her own protection.

Dubitsky and Sampson offered an alternative: Allowing women to ask police to seize an intimate partner’s weapons under the so-called “risk warrant” law that allows police to obtain a court order seizing weapons if they can show the risk of violence.

Groups that work with abused women say that law is more cumbersome and it only allows police to obtain a warrant to seize guns found in a specific place. They said they preferred a law that forces the subject to surrender all firearms.

The Malloy administration’s legislation was supported by the Connecticut Coalition Against Domestic Violence, the Connecticut Women’s Education and Legal Fund, groups that work directly with victims of domestic violence, and several police chiefs, including a former homicide investigator.