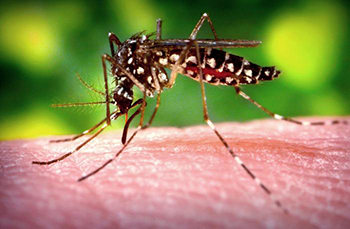 An Aedes species mosquito that transmits the Zika virus

The state’s first case of Zika virus was confirmed in a person who traveled to a Zika-affected area and returned earlier this month, according to the state Department of Public Health. The patient, aged 60 to 69, had a skin rash, conjunctivitis, headache, fatigue, chills and muscle aches, and is now recovering, according to the health department.

The case was detected by the state laboratory, which began testing for the virus on Feb. 29. The lab has received 198 samples to test, and 67 results have been returned.

“We encourage those concerned about symptoms to consult their doctor, particularly if they have traveled to an affected area and particularly if they are pregnant. We have been actively taking steps for months to prepare for a positive case, including expedited testing and a coordinated response across agencies. While the risk of transmission is low, we are nevertheless no doubt continuing that preparation to the extent that we can,” Gov. Dannel P. Malloy said in a statement.

Public Health Commissioner Raul Pino urged residents in a statement to avoid travel to affected countries, and to be vigilant if they go.

There have been 258 cases of Zika reported in 34 states and Washington, D.C. According to DPH, 18 of those cases involved pregnant women, and six were sexually transmitted.

Information on the Zika virus, including affected countries, is available from the U.S. Centers for Disease Control and Prevention.