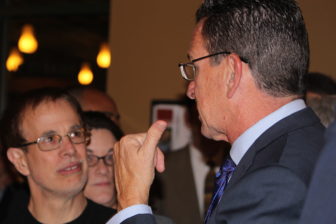 Gov. Dannel P. Malloy has formally asked to reopen a major benefits contract with state employees, but his request has been met with a qualified “no” from labor’s chief negotiator.

Hartford attorney Daniel E. Livingston, who represents the State Employees Bargaining Agent Coalition, wrote that he could not grant the administration’s request without authorization from the various bargaining units.

But Livingston did invite Malloy’s chief negotiator to meet and discuss “your view of the state’s fiscal situation,” adding that, “We will share our perspective as well.” Union leaders have insisted for months that state employees, who granted concessions in 2009 and 2011, should not be asked to sacrifice again. The solution, they add, is to raise taxes on wealthy households and major corporations.

SEIU, the parent organization of some of the state’s largest unions, posted links to both the administration’s letter, and Livingston’s response, on its website this weekend.

“We are exceptionally disappointed that SEBAC has chosen to discuss these critical issues via press release,” Malloy spokesman Devon Puglia said Sunday, “but we’re more alarmed, if not completely stunned, at the ludicrous rationale given as to why long-term benefits cannot or should not be part of the discussion. At a time when critical state services and programs are being re-evaluated, SEBAC leadership is refusing to have a conversation about changes to benefits and veiling that position by putting forth a ridiculous argument that SEBAC isn’t empowered to negotiate on behalf of its members. Isn’t that the whole point of SEBAC?

“SEBAC should come to the table and talk about benefits. They need to adjust to Connecticut’s new economic reality. It’s that simple,” Puglia said.

Larry Dorman, spokesman for one of the largest state employee unions, Council 4 of the American Federation of State, County and Municipal Employees, said SEBAC issued no “press release” as Puglia charged. Copies of letters from Livingston and from Undersecretary Lisa Grasso Egan, head of the state Office of Labor Relations, were posted on union websites as a courtesy to rank-and-file members, Dorman said.

“We are democratic organizations, and we have a responsibility to report to our members – which we did, and will continue to do,” he added.

The governor, whose administration has been in separate negotiations for several months with most bargaining units over wages, has faced increasing pressure from legislative leaders to pursue broader concessions involving health care, pensions and other benefits to address swelling budget deficit projections.

Malloy has said he is open to discussing benefits concessions and has hinted on several occasions that this intention was passed along informally to union leaders. The current benefits contract covering most state employees does not expire until 2022.

“The governor has made clear since his speech on February 3 that reasonable changes to state employee benefits must be on the table,” Puglia said. “In the weeks since, the administration has tried to work with its partners in labor and, out of professional respect and courtesy, has done so without negotiating through the press.”

But the governor removed any doubt this past week when Grasso Egan wrote to SEBAC on March 14 requesting talks.

“I trust that you can appreciate, given the magnitude of the situation, the state cannot wait until the 2022 negotiations in these areas,” she wrote to Livingston. “Therefore it is my hope that SEBAC will agree to discussions.”

Livingston responded on March 17 that, “We do not have the authority to enter into the discussions you suggest without the specific direction of our elected rank and file leadership.”

But he added that, “We would be happy to have a meeting with you and/or other appropriate representatives of the administration about your view of the state’s fiscal situation and we will share our perspective as well.”