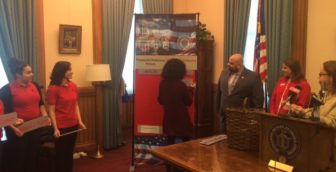 A student from the Law and Government Academy in Hartford posts the name of Ted Cruz, winner of the top line in the GOP primary.

The candidates were chosen at random, their names picked by Secretary of the State Denise Merrill from an artifact on loan from the Connecticut Historical Society — a basket owned by the state hero, Nathan Hale.

The choices in the April 26 primary in the order of appearance: De La Fuente, Hillary Clinton and Bernie Sanders for Democrats; and Cruz, Ben Carson, Donald J. Trump and John R. Kasich for Republicans.

Jeb Bush, Marco Rubio and many of the other Republicans who ended their campaigns formally notified Merrill they no longer are candidates. Carson did not respond to requests by Merrill’s office for authorization to keep him off the ballot, she said.

Even if candidates announce an end to their campaigns, state law requires the secretary of the state to keep them on the ballot unless they officially notify her office.

Voters of both parties also will have another choice: They can cast a ballot for “uncommitted,” which could mean the election of delegates who would be free agents at the two nominating conventions.

Based on 28,000 new registrations so far in 2016, Merrill predicts a healthy turnout.