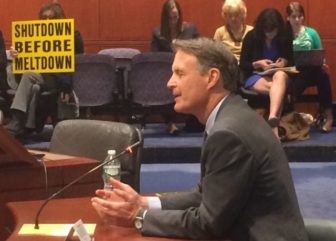 Evan Bayh, the co-chair of an advocacy group funded by the nuclear power industry, makes a pitch for the importance of nuclear power. A spectator demurs.

Evan Bayh, the former governor of a coal-burning, nuclear-free state, arrived in Hartford as the smiling face of the nuclear power industry Thursday, making a soft sell for Connecticut to consider ways to keep its Millstone station economically viable.

The co-chair of the industry-funded group Nuclear Matters, Bayh recited the growing list of nuclear plants that have closed prematurely for economic reasons in the face of cheap natural gas, a blow to U.S. goals of reducing greenhouse gases.

“So these are real events, not theoretical, not hypothetical, but real events that are taking place because of the challenging conditions,” Bayh, a Democrat and a former governor and U.S. senator from Indiana, said in testimony at an informational hearing conducted by the legislature’s Energy and Technology Committee.

Nuclear power produces 63 percent of carbon-free energy in the U.S. and 97 percent in Connecticut, Bayh said.

The informational hearing was instigated by broad concerns raised by Dominion Resources, the owner of Millstone, the largest power plant in New England and the source of about half of Connecticut’s electricity.

The hearing addressed what would happen if Millstone were to close, but it cast little light on the current economic condition of the twin-reactor plant in Waterford or what changes Dominion might want in the laws that shape a largely deregulated generation market.

The economics of generating electricity

Rep. Lonnie Reed, D-Branford, the co-chair of the committee, said the session was inspired by the Marvin Gaye song, “What’s going on?” She asked Dominion’s representatives point blank if Millstone will close.

These challenges are driven by falling energy prices, Stoddard said. “Similar trends,” he added, led to a plant closure in Wisconsin in 2013.

Gov. Dannel P. Malloy, who met privately with Bayh and top executives of Dominion before the hearing, is keeping the question of aiding Dominion at arm’s length, saying he had not had an adequate opportunity to study the issue.

His administration also was circumspect. Katie Dykes, the Department of Energy and Environmental Protection official who oversees energy policy, told the committee that the loss of Millstone would be a blow to the state’s generating capacity and its efforts to reduce greenhouse gases.

But she offered no opinion on whether the state should intervene in the marketplace, as the industry has sought in other states, by offering credits for nuclear-generated electricity in recognition of the fact that it produces zero carbon emissions.

“We have no way to confirm, no reason to believe the Millstone units would retire during the 10-year period we’re looking at,” Dykes said, referring to the regularly updated forecasts the state makes about the energy markets. “Dominion would be the one to answer that.”

Arthur H. House, the chairman of the Public Utilities Regulatory Authority, also shied from endorsing or opposing any mechanism that would make nuclear-generated power more valuable. But he warned that reaching clean air goals probably would be impossible without Millstone.

The consumer group AARP submitted measured testimony, saying the group is “fuel neutral,” but concerned with reliability and affordability.

“Any proposed bailouts should focus primarily on the cost to consumers and the alternatives to such bailouts,” said John Erlingheuser of AARP. “Unintended consequences should be studied. For example, will bailouts stifle the development of low-cost natural gas-powered plants or renewables?”

Environmental advocates were also present during the forum and testified in opposition to subsidizing the plant when funds could be invested in renewable energy.

Chris Phelps, director of Environment Connecticut, expressed skepticism at Dominion’s claim about the effect of falling energy prices on its ability to stay profitable. He said it is the technology that is at fault, not the price of energy.

“The economics are working against the nuclear industry,” Phelps said.