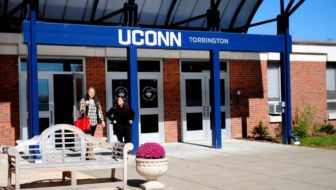 With state funding and the number of students headed for college shrinking, University of Connecticut officials are recommending closing the school’s Torrington campus.

If the Board of Trustees signs off on the closure during its April meeting, it will mark the first time a Connecticut public college has closed a branch or satellite campus.

The projected decline in the number of students that traditionally fill college classrooms will continue to put pressure on some public colleges in the state, said Rep. Roberta Willis, the House chair of the legislative committee that oversees higher education in Connecticut. The U.S. Department of Education estimates high school-aged students will decline in the state by another 7 percent by 2023.

“There is going to be a wake-up call,” she said during an interview, suggesting that recruiting more adult students will be needed to fill this void.

At the state’s dozen community colleges, which are governed by a separate board, enrollment has been steadily declining over the last five years. At UConn’s Torrington campus, enrollment has dropped from 244 students in 2011 to 136 this semester.

“We have been carefully examining how we can maintain academic quality in an era of increasingly scarce resources,” UConn Provost Mun Choi and Vice Provost Sally Reis wrote students and staff Friday.  “After careful deliberations, we’ve decided that one of the options we must pursue is the closure of UConn’s Torrington campus.”

This semester, there are 88 full-time and 48 part-time students working toward undergraduate degrees in business administration, English, human development, psychology or general studies. With the high school-age population in Northwest Connecticut shrinking, fewer students have been enrolling at the regional campus of the state’s flagship university.

How much the university will save by closing Torrington was not immediately available, though the school’s total operating budget for the current fiscal year is just $1.4 million.

While UConn faces a significant cut in state funding as legislators work to close growing budget shortfalls, a spokeswoman for UConn said that the closure of one of its five regional campuses is not expected to save much, since only eight full-time employees work there, and they will be offered a transfer to another campus. In addition to the regional campuses, UConn has separate campuses for its law school and its medical and dental schools.

The Stamford and Hartford campuses are in the middle of major renovations to expand student enrollment, as is UConn’s main campus in Storrs.

UConn spokeswoman Stephanie Reitz said the closure is more of a long-term strategy to avoid spending an estimated $8.6 million on necessary construction projects to replace or repair a roof, boilers, HVAC, septic system, parking lots and sidewalks over the next 10 years.

If approved, the campus would close at the end of the semester in two months. Students would be offered enrollment at the Waterbury campus, which is a 30-minute drive away.

“In this time of scarce financial resources, it is not prudent to operate a regional campus with consistently decreasing enrollment and the inability to offer the same collegiate experience as provided at other UConn campuses,” an announcement of the proposal reads.

It has not been determined what will happen to the property in Torrington.

“The university would cooperate with the City of Torrington and other state agencies as they explore a suitable new use for the land and buildings,” reads the proposal.

Proposals to close various regional universities or centers owned by the state’s public college systems in previous years have faced significant roadblocks as legislators pushed back on those efforts.

That is not expected with this closure, said Willis, whose district includes Torrington.

“We’re all on some level pretty discouraged by this, but I am resigned to their decision on this, whatever it may be,” she said. “We are pretty united in what seems like the future of that campus. It’s been on life-support for a number of years.”