Board of Regents gives final okay to tuition hikes 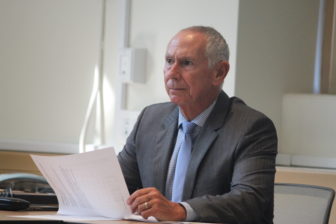 Tuition increases next year for many of Connecticut’s public colleges and universities were given final approval Tuesday morning.

The Board of Regents for Higher Education approved 3.5 to 5 percent tuition hikes for the 17 schools in the Connecticut State Colleges and Universities system with only one dissenting vote.

“No increase would … have meant a real discussion about reduction in workforce,” CSCU President Mark Ojakian said during the regents meeting at Manchester Community College. “Any reduction in the number of full-time tenured faculty would have meant a reduction, I think, in the high-quality education that those faculty members provide to our students.”

The vote came one week after Ojakian proposed the tuition hike and met with the student advisory committee to receive its input. The system’s nearly 90,000 students were on spring break when Ojakian made the announcement.

The only dissenting vote on the proposal came from Gordon Plouffe, a Manchester Community College student who is a member of the board.

In recent years, attempts to increase tuition have been met with student protests. That was not the case this year.

Only two students and two faculty members participated in the public comment portion of the meeting. None of the four addressed the proposed tuition hike.

Instead, they urged board members not to disband Three Rivers Community College’s associate degree program in civil engineering technology. After much discussion, the board voted to terminate the program.