The national 50CAN education reform group – whose founding was inspired by the Connecticut-based advocacy group ConnCAN – is merging with StudentsFirst, a national group that was started by the controversial past chancellor of Washington, D.C., schools, Michelle Rhee. 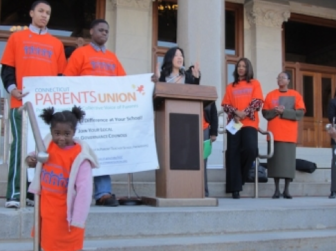 Micheele Rhee speaks to a crowd during a rally at the state Capitol in 2012.

ConnCAN first opened in New Haven in 2005 and focuses much of its time lobbying the legislature for the expansion of charter schools.

And then in 2011, after testing out the ConnCAN model in Rhode Island first, the effort to bring this approach to more states was formally spun off as an independent non-profit organization named 50CAN. Marc Porter Magee left his role as ConnCAN’s chief operating officer to become 50CAN’s first president.

In Connecticut, the ConnCAN has backed many of Gov. Dannel P. Malloy’s controversial education reform initiaitves to overhaul how teachers earn tenure, change how teachers are fired and begin linking teacher evaluations to test scores.

Rhee aired TV commercials in the state in 2012 to support Malloy’s education bill and spoke at a rally on the steps of the state Capitol.

“We view this merger as a significant advancement for education improvement efforts. It means two strong organizations will come together to have an even greater impact for kids,” she said. “And while we are excited about this news, ConnCAN will remain independent and will continue working as hard as we can to make sure all children in Connecticut have access to the great public education they need and deserve.”

Here’s the full story from The74Million.org, a nonprofit news organization that first reported the merger.

Correction: An earlier version of this article incorrectly identified 50CAN as part of ConnCAN. They are two separate nonprofit advocacy groups.