Union leaders have been consistent, if somewhat restrained, in their opposition to granting another round of employee concessions to mitigate looming state budget deficits.

But that restraint ended last week when the unions’ chief negotiator sent a stinging rebuke to the Republican legislative leaders who issued the first call for concessions 12 months ago.

“On the question of whether we should engage in discussions designed to allow the state to break its binding contractual commitments, we will continue to be guided by our democratically elected rank and file leadership structures, rather than by the appeals of self-interested politicians of either party,” Hartford attorney Daniel Livingston, negotiator for the State Employees Bargaining Agent Coalition, wrote.

House and Senate minority leaders, Themis Klarides and Len Fasano, said Livingston’s statements are political gamesmanship that only increase the likelihood more rank-and-file workers will face layoffs that otherwise could have been avoided.

Livingston also attacked the motives of Republican leaders, who have said concessions are the best way to preserve as many state employees’ jobs as possible.

“We note your new-found concern for the state employees you have vilified for two decades, and your insistence that there should be a new “tax” on working families who provide public services so that we can avoid asking far less on a percentage basis from those who can truly afford to pay — the 1 percent who are the only ones moving forward in this economy,” Livingston wrote. 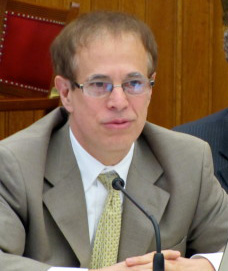 Livingston has said he won’t open concessions talks with Gov. Dannel P. Malloy’s administration unless directed to do so by the member unions in the coalition. Malloy and others have said Livingston has the process backwards and should be urging the rank-and-file to support further wage and benefit givebacks.

Klarides and Fasano first called for another round of concessions in April of last year as part of their budget proposal for the 2015-16 and 2016-17 fiscal years. They renewed that call this past February, and again in a March 24 letter to Livingston.

Nonpartisan analysts are projecting huge deficits in state finances — about $900 million or 5 percent next fiscal year, and more than $2 billion or almost 11 percent in 2017-18.

Malloy has said he will issue layoff notices later this month to a “very substantial number” of state employees. Though he hasn’t given a precise number, administration officials have said previously that “thousands” of jobs must be eliminated to help balance the next state budget — unless other labor savings can be obtained.

“It’s confusing and sad to me that they (SEBAC leaders) are trying to pick a fight with us,” Klarides said Monday. “Nobody said it was the workers’ fault. But they are part of the solution whether they want to admit it or not.”

Klarides added that while Livingston’s letter “is playing politics with people’s lives, … there’s always hope they will see this as a big-picture problem and that it’s all hands on deck.”

But union leaders argue they have sacrificed more than others in the past, and that the governor and General Assembly should raise taxes on wealthy households and on corporations.

“For too many years, your caucus has voted in lock step: No on protecting the services people need, no on taxing those who can afford to pay, no on clean contracting, no on equal opportunity, no on virtually anything that could help the struggling 99 percent move forward,” Livingston wrote to Republican leaders. “When and if you respect the struggles of working families, private and public, and the positive role our government must play in those struggles, we look forward to working with you to make Connecticut a better, stronger and fairer state.”

Malloy and his fellow Democrats in the House and Senate majorities have said there is no appetite to raise taxes this year. The two-year budget adopted last June increased taxes over the biennium by more than $1.3 billion. Democratic legislative leaders also have asked unions to grant concessions.

“We are losing taxpayers in this state,” Fasano said Monday. “It’s a shrinking base to tax. So we’ve got to change the structure” of government and reduce spending.

Fasano added he also was disappointed by Livingston’s letter but that he believes many rank-and-file workers want concessions negotiations at least to be given a chance. “The powerful — who wrote that letter — would like to keep the powerless uninformed,” he said.