Well, one Senate is willing to give Merrick Garland a vote 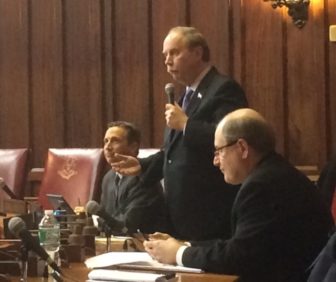 The Senate voted Wednesday to endorse holding confirmation hearings and taking a vote on President Obama’s nomination of Merrick B. Garland to the U.S. Supreme Court, a step unlikely to gain notice in Washington, D.C.

You see, it was the Connecticut Senate.

On a day when the Appropriations Committee is working to meet a deadline for reporting out a budget, an important step on the difficult path to easing the state’s fiscal crisis, the state Senate met to take up one piece of business: a resolution urging the U.S. Senate to act on Garland.

While the Senate is in session, the Appropriations Committee must suspend its work, prompting objections from the Republican minority in the General Assembly that the Democratic majority’s priorities are misplaced.

“It doesn’t make any sense,” said Senate Minority Leader Len Fasano, R-North Haven. “It’s not like Mitch McConnell or Paul Ryan are waiting for my phone call as to what the results were of the vote in the Senate. This is just a partisan, political statement that has no substantive value any place, anywhere at any time.”

Sen. Kevin Witkos, R-Canton, said he believes many Democrats agree with those sentiments, albeit privately.

The resolution is the idea of Senate Majority Leader Bob Duff, D-Norwalk.

“This is really important, not only for our country, but also for our state,” Duff said. “There are a number of cases, and they are mentioned in the resolution, that affect the state of Connecticut. And the outcome of those things definitely affects our state. I think it’s important for us to be on record to say that the nominee of the president should at least have hearings and an up-and-down vote.”

The resolution may be partisan and its timing questioned, but its general thrust is not without support among Republicans nationally. U.S. Sen. Susan Collins of Maine met Tuesday with Garland and publicly favors holding confirmation hearings, as do many prominent Republican lawyers, including President George W. Bush’s attorney general, Alberto Gonzales.

But McConnell, the Kentucky Republican who controls the U.S. Senate agenda as majority leader, is resolute in blocking a Democratic president from filling the vacancy left by the death of the court’s most influential conservative justice, Antonin Scalia.

The deadlock means the court is likely to be shorthanded for a year, until Obama’s successor takes office in January and makes a nomination, beginning the vetting process that is expected to end in hearings and a vote, perhaps next spring.

“It’s really important to show the people of this country our government can function. People are angry out there, and we can debate all the reasons why they are angry, but one of the reasons is because people don’t think their government works well for them in Washington,” Duff said. “I think it’s important for us in the state of Connecticut, where we do have a record of bipartisanship, to show that we do work together and we do expect our federal government to work together as well.”

Duff was the only Democrat to address the measure on the Senate floor. Three Republicans, Michael McLachlan of Danbury, Kevin Kelly of Stratford and Joe Markley of Southington, spoke in opposition, suggesting the Senate had better things to do.

McLachlan said he can anticipate his constituents’ reaction to the brief debate: “They’re going to say, ‘Are you out of your mind? What are you doing?’ ”

The resolution passed on a party-line vote, 19 to 15, with two Democrats absent: Senate President Pro Tem Martin Looney of New Haven and Sen. John Fonfara of Hartford. Looney was attending to a family member recovering from surgery.