In Hartford, mayor and unions step back from the brink 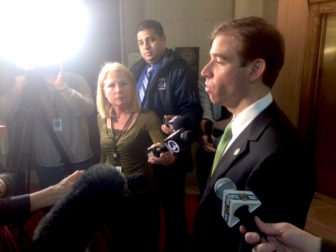 Hartford Mayor Luke Bronin and the city’s labor unions, its council and its legislative delegation took steps Thursday toward defusing a fight that threatened to politically isolate the new mayor as he tries to keep Connecticut’s capital city out of bankruptcy.

In a press conference at the State Capitol, union leaders stood with legislators and council leaders to say they could deliver between $8 million and $12 million in concessions, an olive branch to a mayor they decisively stopped from obtaining sweeping new authority to impose taxes and remake labor contracts.

Bronin responded with his own upbeat news conference at City Hall, ignoring the awkward optics of state legislators and council leaders standing with union leaders, publicly urging the mayor to take a more conciliatory approach.

“I take that as a good-faith first step,” Bronin said. “We’re going to have some very tough decisions and some very tough negotiations still ahead, but I take our labor leaders at their word that they are willing and ready to make real, substantial concessions as a part of an overall effort to get the city of Hartford on the path to recovery.”

With deficits that are projected to hit $48.5 million in 2017, $69 million in 2018 and $88 million in 2019, Bronin says he will need to obtain more than $12 million in concessions and will still have to shrink the workforce through layoffs.

The city has a budget of $533 million, including $284 million for schools. Its authorized non-education workforce for 2016 is 1,429 full-time positions, including 452 police officers and 356 firefighters.

“Even the deepest cuts, and even very substantial concessions, don’t get us over the deficits we face in the years ahead,” Bronin said.

None of the union leaders at the press conference said concessions were reliant on a no-layoff pledge. The presidents of the police and fire unions, Rich Holton and Vince Fusco, said no one was challenging the existence of a fiscal crisis.

“We did not create the problems afflicting our great city, but we fully intend to be part of the solution,” said Shellye Davis, a school paraprofessional and president of the Greater Hartford Labor Council.

Bronin, 36, a Rhodes Scholar and former legal adviser to Gov. Dannel P. Malloy, took over as mayor of Hartford, an impoverished city that serves as capital of the richest state in the U.S., on New Year’s Day. He defeated Pedro Segarra, the incumbent, in a Democratic primary.

In his first weeks in office, Bronin said that previous administrations has obscured a structural financial crisis by refinancing the city’s debt and using one-time revenues, such as the sale of a city garage, to balance the budget. 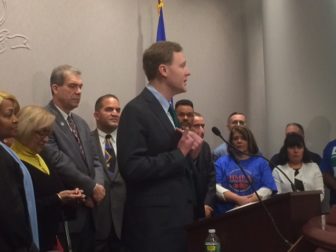 His solution was to ask the General Assembly for unprecedented powers: Under the auspices of a new Hartford Financial Sustainability Commission, he could renegotiate labor deals and impose taxes on tax-exempt institutions.

Hartford Hospital, Trinity College, the University of Hartford and major non-profits objected to the new taxing authority, while labor leaders complained that Bronin was acting precipitously in seeking to free the city of its labor commitments.

“In less than the 90 days in office, Mayor Bronin has decided to use his time pushing this legislation instead of bringing everyone to the table where they could figure this out together,” Lori Pelletier, the head of the Connecticut AFL-CIO, said in testimony submitted to the legislature. “Mr. Bronin’s strategy provides an interesting insight to his views on workers and their representatives, and that is it’s his way or the highway.”

The only applause came from the Connecticut Conference of Municipalities, which saw the proposal as a wedge that could help other struggling cities narrow the long list of property exempt from the only tax municipalities can impose: the property tax.

But Bronin soon found himself alone, potentially eroding his influence at the outset of what is likely to be a difficult four-year term. The city’s delegation to the General Assembly refused to push the mayor’s bill, and the City Council voted 8-1 on Monday to reject a resolution supporting it.

On Thursday, the measure died from inaction in the legislature’s Finance, Revenue and Bonding Committee when the panel declined to take it up at the last meeting before its deadline for reporting out legislation.

Bronin declined to say the legislation was a mistake.

“Look, I think the legislation helped shine a light on the crisis that we face, and I think it created some conversations that might not otherwise have been had,” Bronin said.

He left little doubt he would be back at the General Assembly next year looking to define the state’s financial relationship with its cities, particularly its capital city, where half the property is tax exempt. With a high tax rate, a stagnant tax base, the nation’s second smallest percentage of home ownership and the state’s highest poverty rate, Hartford cannot afford to raise taxes, he said.

“Our mill rate right now is 74. In New Haven and in Bridgeport, it’s down in the low 40s. I don’t believe we can do an across-the-board mill rate increase without killing the city,” Bronin said. “It might happen quickly. It might happen slowly. But if we continue to raise the burden on our small businesses and our mid-sized employers, we’re going to see more and more of them shut down, shutter their doors and leave town. And we cannot afford to do that to the city of Hartford.”