Kasich may not excite, but he says he can beat Hillary 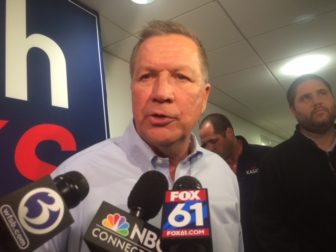 Fairfield – A playful John Kasich made his entrance on tiptoe Friday, sneaking in during a long-winded introduction by an old congressional pal, Chris Shays. Smiling broadly, Kasich signaled to the giggling crowd not to give him away as he edged forward.

With the Republican field of 17 down to three, the Ohio governor no longer has to worry about getting a chance at the microphone, even if he arrived here at Sacred Heart University in a distant third place, unburdened by same press contingent that trails Donald J. Trump.

Kasich drew a welcoming crowd of several hundred for a 90-minute forum, where he fielded questions on taxes, natural gas fracking, health care – and the arcane rules of political conventions that will determine if he can ultimately sneak past Trump and Ted Cruz.

But his central talking points were electability in November and an ability to govern in January, arguments that fell flat during the long season of televised debates that featured insulting exchanges and fiery promises to ban Muslims and “carpet bomb” terrorists.

“As president, it’s going to be my job to get everybody together down there,” Kasich said of Washington, where he served as a congressman for 18 years. “It’s crazy.”

The New York primary is April 19, then attention turns to five eastern states holding primaries on April 26: Connecticut, Delaware, Maryland, Pennsylvania and Rhode Island. The GOP contests are winner-take-all in all but Connecticut and Rhode Island.

“We’re going to get delegates here, for sure,” Kasich said after the forum. “It’s a matter of how many. We have a good team. We’ll see how it goes.”

Kasich was dismissive of concerns that a convention that turned to someone other than the frontrunner would shatter the party and hand the nominee an empty victory.

“I know if I don’t get picked, it is going to be an empty victory, because nobody beats Hillary but me. I’m not worried about that,” Kasich said. “It’s going to be important to anybody who wins to unify. I mean, that’s just the way it goes.”

Kasich, 63, a two-term governor who also served nine terms in the U.S. House, beginning in 1983, was relaxed, funny and blunt during the town-hall style forum.

He invited the woman to join him at the airport and try flapping their arms to get to his next destination. Message: The flat tax has the same chance of passage. 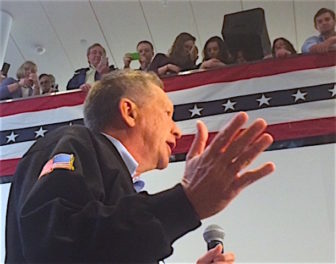 A student told him about a problem her family was having with the Veterans Administration over an issue involving her father, a Vietnam veteran who died several years ago. Kasich stopped her.

“You were 17 when you lost your dad, how you gettin’ along?”

“I’m getting there,” she replied.

Kasich told her that his parents were killed in a car accident. They died in 1987 in a collision with a drunken driver.

“You know what? Friends came; I found my faith,” Kasich said. He told her to “reach up to the light.” Then he instructed her to give Shays her contact information so they could look into the issue with the VA.

Relaxed and cordial during the forum, Kasich turned testier later during a five-minute exchange with reporters that focused on the feasibility of winning a convention after finishing third in the race for delegates.

“I’m going to tell you honestly, I think the media has created a very negative attitude about conventions,” Kasich said. “The convention is nothing more than an extension of the political process, but I’m done talking about the process.”

He left Fairfield for a flight to Syracuse, N.Y. 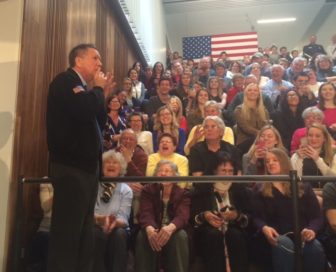 John Kasich shushes the crowd as he sneaks up on Chris Shays.

The buzz before Kasich arrived was a poll showing Trump with an unfavorable rating of 69 percent. Shays said no one with those unfavorables can win.

“We learned this with Linda McMahon: If your unfavorables are above 50 percent, you’re in deep shit,” Shays said.

McMahon, the co-founder of WWE, the wrestling entertainment company based in Stamford, won GOP primaries for open U.S. Senate seats in 2010 and 2012, only to soundly lose the general elections.

“I think it’s fair to say if it’s a Trump-Clinton race, we may lose 49 states and seats in the House and the United States Senate,” McKinney said. “I’m hoping John Kasich starts winning some races and does a lot better.” 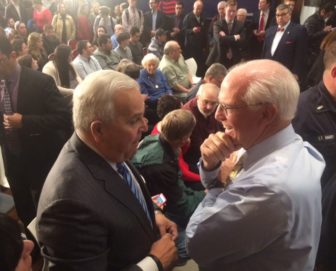 But there was another lesson in 2010 and 2012: Primary voters often don’t care about electability. McMahon beat Shays in 2012, even though polling showed he probably would have been the stronger candidate in November.

Kasich, whose only primary win was in his home state, has no path to securing the 1,237 delegates necessary to win the nomination at the Republican National Convention in Cleveland. His only hope is an open convention and a successful rules fight.

To help Mitt Romney in 2012, the GOP passed a rule requiring candidates to win eight primaries to have their names placed in nomination. It was on the mind of the voter who got to ask the last question to Kasich: What about the Romney rule?