Outgoing CT budget springs another leak, could threaten next year’s as well 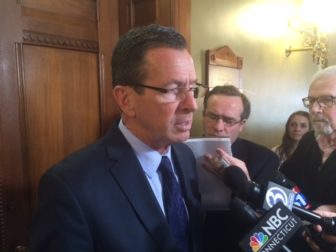 The last-minute shortfall in the outgoing budget threatens to intensify a bitter, fight over how to balance the next state financial plan.

“The question is no longer whether we’re in a new economic reality; it’s what we’re going to do about it,” Malloy wrote in a statement that accompanied his latest monthly budget forecast. “Today’s projections make clear that we can’t wait and hope that future revenue projections will save us from making tough decisions. We need to solve our whole fiscal problem, and not with Band-Aid solutions like using the Rainy Day Fund for next year’s problem. This year can’t be business as usual – we need to do things differently.”

The “rainy day fund” the governor referenced is the common term for the state’s emergency budget reserve. Malloy said earlier this week he won’t allow the legislature to use the reserve — a one-time source of funds — to help pay for ongoing programs in the new state budget, which begins on July 1.

The state may experience that income-tax volatility this month. Analysts for the administration and for the legislature are tracking income tax receipts between now and April 30. Traditionally projections for the tax tend to fluctuate after the April filing deadline.

The $19.9 billion budget the Appropriations Committee approved two weeks ago for the fiscal year beginning July 1 is roughly $340 million to $360 million out of balance based solely on revenue projections developed in late February. Further complicating matters, the plan also counts on about $50 million more in labor savings than the administration expects to achieve through layoffs, retirements and hiring restrictions this spring.

With $406 million on hand, the rainy day reserve has enough funds to cover most of this difference.

Malloy, who recommended that legislators make deeper cuts to municipal aid and social services to bring the 2016-17 budget into balance, warned that if the rainy day fund is depleted, that increases the likelihood that any last-minute deficit in 2015-16 would have to be closed with borrowing.

Leaders of the Republican minorities in the legislature, Sen. Len Fasano of North Haven and Rep. Themis Klarides of Derby, said the new numbers show “the severity of the problems facing our state. But until leaders realize that this is not a new economic reality, that this is the reality our state has been facing for years under the current fiscal policies, we will remain stuck in a pattern of crisis.”

The GOP leaders added that “we need to do more than cut and close the immediate deficit before us. We also need to implement long-term structural changes to restore predictability and stability to our budget. Right now, the unpredictability of our state finances is crippling. We have to fix the problem at hand, but we also have to shift the direction of our policies for the long-term.”