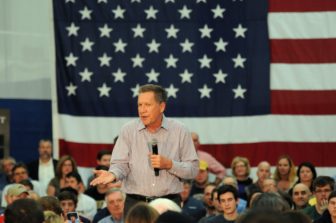 Glastonbury — Ohio Gov. John Kasich arrived in this affluent suburb of Hartford on Friday as the Super PAC promoting his presidential campaign began airing television ads, a late effort to raise his profile in a state where he is running second to Donald J. Trump.

With no path to winning the delegates necessary to compete for a first-ballot GOP nomination in July, Kasich is campaigning here in hopes of keeping Trump below 50 percent, blocking him from winning all the delegates at stake next week in the Connecticut primary. A Quinnipiac University poll this week showed Trump leading Kasich, 48 percent to 28 percent.

The same poll showed what is Kasich’s biggest strength and weakness: He is virtually tied with Trump in Connecticut among likely primary voters who place a premium on experience and electability, but those voters are a distinct minority.

Kasich carried a new poll from WMUR in New Hampshire that bolstered his case for electability. He says 15 polls now show him as the only Republican who can beat Hillary Clinton in November, and the WMUR poll showed something else — Trump voters in the New Hampshire primary who now have second thoughts.

“These polls are really bizarre. These polls showing turnarounds and people having buyer’s remorse are interesting,” Kasich told reporters after his town-hall style forum. ”That will be a big consideration when we get to Cleveland.”

But how does he get more people to place a higher premium on electability, one of the factors that drew former U.S. Reps. Chris Shays and Nancy Johnson, who served with him in Washington, to his side in Connecticut?

“Right here. Right here,” he said, holding a copy of the WMUR survey. “I lost in New Hampshire and now I’m beating Trump with those people who voted. See, I think at the end it settles down,” Kasich said. “And when you go to a convention when nobody has enough delegates, trust me, delegates are going to want to know who can win. Because we don’t want to lose the Supreme Court, get wiped out in the U.S. Senate and lose offices all the way from the courthouse to the state house.”

Trump is holding events Saturday in Waterbury and Bridgeport. Clinton will be in New Haven on Saturday and Bridgeport on Sunday, while her Democratic rival, Bernie Sanders, is appearing Sunday night on the New Haven Green and Monday morning at a riverfront park in downtown Hartford. Only Republican Ted Cruz is skipping the state.

A tragedy in Ohio – the mass murder of eight in a rural Appalachian community – made Kasich consider cutting short his campaign swing in the Northeast, where there are primaries Tuesday in Connecticut, Delaware, Maryland, Pennsylvania and Rhode Island.

“If I needed to be back home for some reason, I would go,” Kasich said. “But we’ve handled a lot of crises, and you handle them in the way in which you get the best resolution. And if I’m needed, I’ll be there. But I don’t want to go running into something where I’m not going to add anything of great significance.”

Stripping off his jacket and pacing across a square riser that resembled a tiny boxing ring, Kasich told his audience during the forum that the White House was no place for “on-the-job training,” a dig at Trump, who is trying to become the first president since Dwight D. Eisenhower to reach the Oval Office without holding elective office. 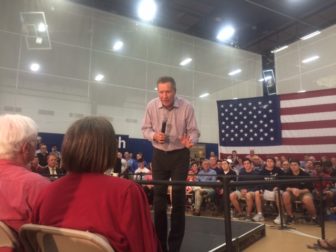 The audience in a muggy gymnasium at Glastonbury High School reflected his appeal to former and present elected officials, who largely have shunned Trump. Rep. Prasad Srinivasan, R-Glastonbury, the physician who represents the town in Hartford, was one of the introducers.

Voters in the audience said they liked a resume that included a substantive position in Congress and, more recently, governor of Ohio, a swing state in the struggling Rust Belt.

“He’s got a track record,” said Todd Kalagher of Glastonbury. Asked what he would do if Trump is the nominee, he replied, “It would be tough.”

Jay and Carol Fromer of Glastonbury said they were early Kasich supporters who see his experience in Congress and as governor as a plus, not a reason to dismiss him as establishment.

State Sen. Tony Hwang of Fairfield, the chairman of the Kasich campaign in Connecticut, said voters should be impressed with his record in Ohio, where his supporters say he inherited a stagnant economy after the Great Recession of 2008.

“He turned that around in six years,” Hwang told the crowd. “A $2 billion surplus going into the rainy day fund and over 400,000 new jobs.”

The same talking points were emphasized in the television ad aired by New Day for America, the Super PAC, and by Kasich. He faced TV cameras in front of a U.S. flag the size of a starter home. Curtains shrank a gym with a capacity of more than 3,000 to about 1,300, the crowd estimate provided by the fire marshal.

Kasich’s message was upbeat, a contrast he’s tried to draw with Trump’s withering assessment of the U.S. “We can fix all this,” Kasich said to applause. “Our country is unbelievably great.”

It was little changed from his speech at Sacred Heart University in Fairfield, his previous campaign stop in Connecticut. He took questions from the audience, who wanted to know more about his approaches to policy – and be reassured about his ability to compete.

Kasich told the crowd about the New Hampshire poll that asked voters about potential matchups in the November. Trump fared poorly.

“In the third matchup, Hillary Clinton gets 36 percent,” Kasich said, pausing a beat, “and John Kasich gets 50 percent.”

It was the biggest applause line of the evening.