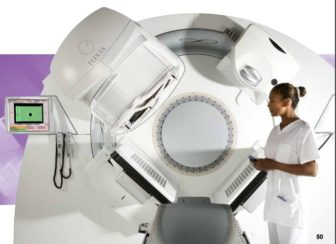 A picture of an Elekta linear accelerator, included in Middlesex Hospital’s certificate of need application.

Middlesex Hospital has reached a settlement with state regulators that will allow it to put a new piece of cancer treatment equipment in its shoreline clinic in Westbrook – a proposal that drew opposition from Yale-New Haven Hospital and sparked questions about the intersection of state regulation and health care competition.

The agreement is based on a revised proposal the hospital submitted after an official at the state Office of Health Care Access proposed denying Middlesex’s application. It calls for Middlesex Hospital to replace one of the two linear accelerators – used in radiation treatment for cancer – from its Middletown facility and put the new one in Westbrook.

But unlike the initial proposal, the agreement calls for the hospital to maintain the accelerator that’s being replaced to use as a backup in case the other Middletown accelerator is inoperable. The agreement also requires Middlesex to add a CT scanner to the Westbrook clinic so patients could receive their entire course of treatment there, rather than having to travel to Middletown for at least one service, as would have been the case under the initial plan.

It will probably take 18 to 20 months to begin the radiation oncology service at the Westbrook clinic, largely because of the time it will take to build an addition to the existing facility, hospital officials said.

The plan to replace Middlesex’s aging linear accelerator itself wasn’t controversial, but the idea of putting the new one in Westbrook, rather than Middletown, sparked opposition.

Middlesex Hospital officials said the move would allow the hospital’s shoreline-area patients to receive care closer to home, rather than traveling to Middletown for daily radiation, as they do now.

But officials at Yale-New Haven Hospital – which operates its own linear accelerator in Guilford, 13 miles from Middlesex’s Westbrook facility – said the region didn’t need another linear accelerator, and that adding one could raise health care costs while potentially hurting care quality. They also suggested Middlesex’s calculations overstated the number of patients likely to use a shoreline facility, rather than the Middletown cancer center.

In the proposed denial of Middlesex’s initial proposal, issued in December, Office of Health Care Access hearing officer Kevin Hansted said the hospital hadn’t shown a clear need for the change in location and raised questions about its impact on care quality, accessibility and cost-effectiveness, as well as the level of access Medicaid patients would have if one of the two machines were no longer in Middletown.

During the process, in which Yale-New Haven was granted intervenor status, Middlesex Hospital officials sought to place the issue in the context of competition in the state’s health care market, a matter that has drawn increased attention from policymakers in recent years as hospitals join larger chains.

There are three linear accelerators on the shoreline within 20 miles of Middlesex’s Westbrook clinic – one at Yale’s Guilford facility and two at Lawrence + Memorial Hospital’s Waterford cancer center. Middlesex Hospital President and CEO Vincent G. Capece, Jr., noted at the time that Lawrence + Memorial is seeking to join the Yale New Haven Health System, and that if that occurs, “It effectively gives Yale a monopoly on the shoreline…and that’s a big concern for us.”

Middlesex officials also pointed to broader concerns some have raised about the regulatory scheme, known as the certificate-of-need process, that governs whether hospitals can open facilities or acquire certain equipment. That process is aimed at preventing “costly duplications of services.” Critics of certificate-of-need laws, including the Federal Trade Commission, say they are at odds with promoting market competition.

“Especially in light of the rapid consolidation of the health care market in Connecticut, it [is] important that OHCA not allow the CON process to be used as a means of lessening competition,” one of Middlesex Hospital’s filings in the case said.

At the time, Petrini said Middlesex’s concerns didn’t seem to be supported by the facts, and questioned the idea of focusing only on service provision on the shoreline or linking the application to the Yale-L+M proposal, which is going through a separate review process.

Capece said Friday that the certificate-of-need process serves a legitimate purpose, but questioned how it was applied in this case, and said the way it was used by a competitor added time and cost.

“But I think ultimately we got to the right answer,” he said.

A task force appointed by Gov. Dannel P. Malloy is reviewing the state’s certificate-of-need requirements and is expected to make recommendations by the end of the year. Gary C. Havican, Middlesex Hospital’s vice president for strategic planning and ambulatory operations, is one of 17 members.

In addition to the other requirements, the agreement calls for Middlesex Hospital to have its radiation oncology programs in both Middletown and Westbrook evaluated by the American College of Radiology, and to seek accreditation for the shoreline program when it renews the accreditation for its main cancer center in Middletown.