Sanders happy to drive the debate, but his goal still: ‘Winning’ 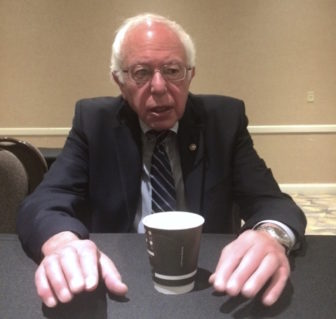 The morning after attracting 14,000 to the New Haven Green, U.S. Sen. Bernie Sanders of Vermont was in no mood Monday to talk about his success in reshaping the Democratic agenda or contemplating that a victory for him could be anything less than winning the presidential nomination.

“We are fighting to become the nominee,” Sanders said. “We’re going to win here in Connecticut.”

Ten minutes before he was scheduled to take the stage at a rally on the Hartford riverfront, Sanders sat in the Mark Twain Room of the Hartford Hilton for the last in a series of four seven-minute interviews, the political and journalistic equivalent of speed dating.

His stump speech – the one he gave the previous night and was about to repeat – is a full hour’s exploration of everything that ails what Sanders sees as a rigged political and economic system, one so tilted to the rich that nothing less than a political revolution is required to set the nation right.

The day before voters go to the polls in Connecticut and four other states, Sanders was wary of saying anything that might be interpreted as a concession his campaign is less about electing him than drawing converts to a political movement.

“We’re going all the way to California and beyond,” Sanders said of the last primary in June. “But look, bringing people together to stand up and fight for economic, social, racial, environmental justice always is a positive thing.

“One of the great crises that we face in this country is that too many of our people have kind of given up on the political process. They’re allowing the one percent and the billionaire class to dictate policy. That’s gotta change. I think this campaign is helping to change that.”

But asked to name a metric for success, Sanders had a curt answer: “Winning.”

With a new survey by Public Policy Polling showing Sanders trailing Clinton, 48 percent to 46 percent, in Connecticut, where Clinton has led Sanders among likely Democratic voters by wider margins in two other public polls, former President Bill Clinton was deferential to Sanders in a brief interview after a campaign stop in Hartford, calling him a positive influence on the campaign.

In remarks to a small audience, Clinton questioned if any state could afford or would be willing to contribute to Sanders’ plan to eliminate tuition at public universities. But when The Mirror asked him to assess Sanders’ contributions to the race, he all but invited the senator to take a bow. 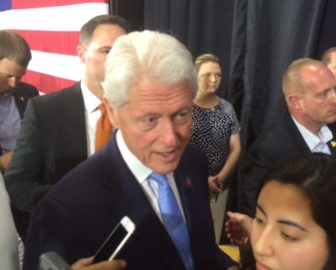 Bill Clinton, after a campaign stop in Hartford, says Sanders’ role in the campaign has been positive.

“I would say on balance it’s been a big plus,” Clinton said.

Sanders became a hero to the left in late 2010, when he delivered an eight-hour speech on the Senate floor in the same angry, exasperated tone he displays on the campaign trail. His target then was the extension of President George W. Bush’s tax cuts for the wealthy.

The speech put him atop Twitter’s list of trending topics. It was published the next year as a book, “The Speech: A Historic Filibuster on Corporate Greed and the Decline of the Middle Class.”

Six years later, it is the foundation of a campaign that eschews the personal. Sanders says he tries to keep 90 percent of his campaign, speeches and interviews on issues, not him.

Sanders, who turns 75 this fall, would be the oldest U.S. president by five years and its first Jewish president. He resists those topics, just as he declines to talk about what role best suits him – leading a political revolution or the chief executive who might take power if the revolution is a success.

The previous night, he talked in New Haven about the oppression of the black community and the challenges to Latinos, Muslims, the gay community and undocumented immigrants trying to find a path to legal status. On Monday, he declined to say whether he sees anti-Semitism as a problem in the U.S. 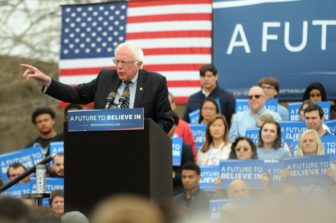 Bernie Sanders at a rally by the Connecticut River in Hartford.

“I don’t believe it’s been a significant role in this campaign,” he said.

That wasn’t the question. How about in society in general?

“All I can tell you is that in my life, I come from a state where there is not all that many Jewish people, and I’ve been elected overwhelmingly,” Sanders said softly. Then more firmly, he added, “OK, I’d rather do questions that [are about] the world and not about me. All right? We got a few minutes.”

He swiped away a question about age like a batter sitting on a fastball.

“Well, I would say stay with me on the campaign trail,” Sanders said, smiling. He turned to an aide, “How many rallies do we have today? Three? OK, follow me.”

But aren’t campaigns for office about the candidate, as well as the issues?

“Of course, it is important,” he said. “But what’s more important is to ask the questions – why the middle class has been declining for 30 years, why we are not progressively dealing with climate change, why you have children in the city, 36 percent of them are living in poverty. Those are the real issues.”

Sanders tweaked Gov. Dannel P. Malloy, a Democrat who was elected and re-elected with the cross-endorsement of the Working Families Party, on Sunday and again on Monday, saying he was mystified how a governor could cut spending for mental health services.

Malloy, whose administration says its spending on mental health actually still would be about 7 percent higher than it was in 2012 after the cuts, is facing a deep, deep budget hole. After two major tax increases in his first five years, Malloy says taxes are off the table for the foreseeable future, a position accepted by legislative leaders.

“Do not believe what the media or anyone else tells you that we cannot change the status quo,” Sanders said in New Haven. “Do not get your head into an austerity way of thinking, that we gotta cut this and cut that. We don’t have to do that.”

Sanders told The Mirror any time a governor is thinking about cutting vital services such as mental health care, the alternative should be higher taxes on the wealthy.

“I understand governors have a difficult time. They are held hostage by corporations and wealthy people. Somebody was telling me that some of your billionaires have left the state. They say we’re not going to pay taxes. That’s outrageous,” Sanders said. “But the bottom line is, when I talk about not accepting austerity, [it’s because] we are the wealthiest country in the history of the world. We’re not a poor country. If we were a poor country, let’s talk about austerity, the kind of sacrifices we have to make. We’re the richest country.”

Malloy helped make Connecticut the first to pass a state law mandating paid sick days and the first to adopt the $10.10 minimum wage sought by President Obama, but he is wary now about aggravating business in a struggling economy. Does Sanders have any sympathy for governors trying to balance such interests?

Malloy, a supporter of Clinton, is the co-chair of the Platform Committee at the Democratic National Convention. He will have something to say about how much of the Sanders campaign is formally endorsed by the Democratic Party should Sanders fall short of the nomination.

“It must be wonderful to not be held responsible for balancing a budget. I’ve only had jobs where I had to balance a budget,” Malloy said, not hiding his annoyance with Sanders’ comments.

But the governor also said Sanders’ campaign has been positive overall for the Democratic Party.

“I think it’s been constructive. I think he’s injected an enthusiasm and a spirit, and he’s raised important issues, and he’s brought people to the table,” Malloy said. “Overall, do I think it’s a net plus? I do.”

Sanders left the Hilton after 10 a.m., late for the rally.

John McNamara, a community college employee who recently stepped down after 22 years as the Democratic chairman of New Britain, waited in a crowd that skewed young. Among voters under age 35 in Connecticut, Sanders is favored over Clinton by a 3-1 margin.

“I’m telling people that he’s bringing the Democratic Party back to its good roots and moving forward with a new deal for the country. And new deal, I mean that in every sense of the word. I think Democrats will be together and unified, but I think he’s pushing the party back to its roots,” McNamara said. “And that’s why I hope it has legs beyond what will or won’t happen this year.”

Jeff Weaver, who is managing Sander’s campaign, was on message as he mingled with reporters, telling anyone who asked that Sanders would pursue delegates until the California primary. But he was less wary about discussing Sander’s impact on the campaign.