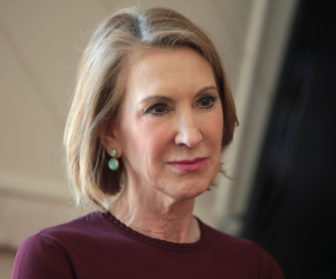 Ever invite people to a dinner party, then realize one of the invited guests is feuding with another? The Connecticut Republican Party has a situation something like that with Donald J. Trump and a woman who seems to detest him, Carly Fiorina.

Fiorina was announced nine days ago as the keynote speaker of state party’s annual fundraiser next month, the Prescott Bush Awards Dinner. She signed on Wednesday to the stop-Trump movement as Ted Cruz’s running mate, less than 24 hours after Trump won the Connecticut primary in a landslide and Cruz finished a distant third.

Will it be awkward for the party to give a platform on one of its biggest nights to Fiorina, who says she is “horrified” by Trump, the man who just won the fealty of the state’s entire delegation to the Republican National Convention?

“I don’t look at it that way,” said J.R. Romano, the state GOP chairman and, as of Tuesday night, a superdelegate opposed to efforts to undermine Trump. “I’ve used this analogy before, it’s like the red-white game of a high school football team. You’re scrimmaging.”

Ah, all in good fun.

Romano said he has no intention of disinviting Fiorina, a former Hewlett-Packard chief executive who once was one of the 17 candidates competing for the Republican presidential nomination. Nor has anyone indicated that Fiorina now might be too busy to keep her commitment.

Justin Clark, the director of the Trump campaign in Connecticut, declined comment.

The choice of Fiorina as a keynote speaker was potentially a provocative one even before she joined the Cruz campaign.  The high point in her own campaign involved a confrontation with Trump last fall over what she saw as a sexist insult.

“Look at that face!” Trump said of Fiorina in a Rolling Stone interview last year. “Would anyone vote for that? Can you imagine that, the face of our next president?”

Fiorina responded during a debate at the Ronald Reagan Presidential Library, making headlines with her arch response: “I think women all over this country heard very clearly what Mr. Trump said.”

More recently, she has disparaged Trump, urging him to “man up” and accept Cruz’s challenge to a debate before the Indiana primary next week. The New York Times reported Wednesday that current and former advisers to Trump say he has long found her to be “an agitating presence.”

Trump again made gender an issue Tuesday night in a dismissive comment about Hillary Clinton in a victory speech after he swept primaries in Connecticut, Delaware, Maryland, Pennsylvania and Rhode Island.

“I think the only card she has is the women’s card. She’s got nothing else going. Frankly, if Hillary Clinton were a man, I don’t think she’d get 5 percent of the vote,” Trump said. “The only thing she’s got going is the woman’s card, and the beautiful thing is, women don’t like her, OK?”

The Bush dinner is May 24, the same night as the Washington state primary. The Republican primary and caucus season ends June 7, with contests in Montana, New Jersey, New Mexico, North Dakota and the state where Fiorina was a corporate executive and once ran for U.S. Senate, California.